« Dana Smith: Rest In Peace. GoFundMe set up for Miami Hurricane Artie Burns and his younger brothers. | Main | Eye On The U Insider - Recapping the week from hell, expectations and thoughts on UM's next coach » 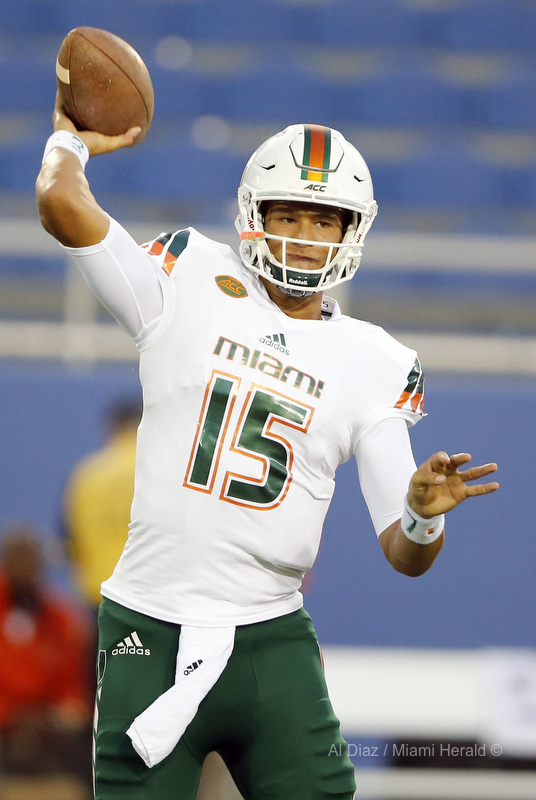 *** Cornerback Artie Burns, whose mom died of a heart attack yesterday, inspired the Hurricanes by showing up for practice Wednesday morning. He will travel with the team to Durham, North Carolina, to play Duke at 7 p.m. Saturday. He gave his teammates a huge lift, and they did the same for him.

*** Miami has not made any official announcement, but as we reported today, Brad Kaaya, who has a concussion, is not expected to play against Duke. However, interim coach Larry Scott said UM coaches and those within the program are discussing the possibility of Kaaya traveling with the team if he doesn't play. The cabin pressure on the plane flight might prevent him from going on the trip, as well as other factors obviously. It's a shame the Hurricanes aren't playing at home Saturday, because Kaaya's presence would be a bonus.

*** Top receiver Rashawn Scott (shoulder) was back at practice catching some balls today, according to Scott. Receiver Herb Waters said he was doing better and expected him to play, but I'm not so sure about that. Coach Scott isn't being specific about injuries.

Here's what Scott said today about Kaaya and Rashawn Scott:

"Brad wasn’t able to practice today but he’s doing better. Again, with those things, those are touchy so we’re going to let the doctors handle that day by day but I did have a chance to speak with Brad. He looked great and he sounded great. You have to calm him down because he’s ready to go, and that’s the competitive nature in him.

"Rashawn was able to get out today, catch some balls and get moving which is part of what’s going on with him, the soreness. That was great to see him out in cleats and a helmet and pads and catching the football. We’re encouraged by Brad, too."

Coach Scott: "Even if he can’t play, that’s something we’re talking about and working through and evaluating. We’ll see. We’re hopeful he will, but we’ll see what happens."