« Fired up Canes: Brad Kaaya back at practice, still going through concussion protocol | Main | "Our student-athletes played their hearts out and won the game fairly...'' »

Canes offensive tackle Sunny Odogwu is loud, happy and has perfected the art of scoring TDs 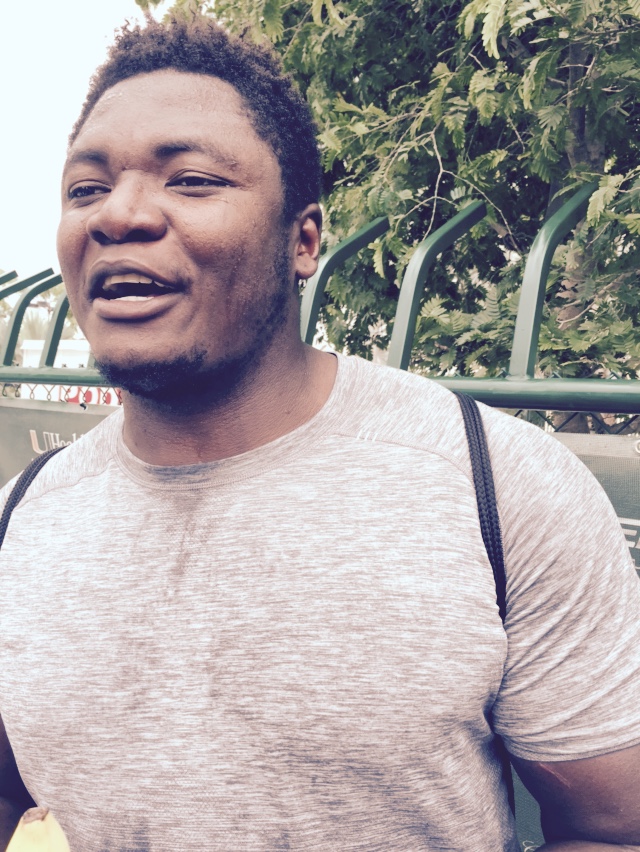 All the talk following the UM-Duke game revolved around one play that will live forever, but all the pandemonium, excitement and controversy over the eight-lateral kick return for a game-winning touchdown as time expired has had many forget another key touchdown from a very unlikely source.

That is, of course, 6-8, 318-pound offensive tackle Sunny Odogwu's fumble recovery in the end zone in the second quarter that helped the Hurricanes jump out to an early lead. It was story time with Sunny on Greentree Practice Fields on Wednesday as he took reporters through the entire sequence.

Here's how it all went down through the eyes of Odogwu:

***"I always try to run to the ball and run to where the ball is on every play. After my block, I pushed my guy outside, so I saw lots of piles, everyone was laying down.

Sunny Odogwu on his touchdown and how he saw the play develop. pic.twitter.com/Q2YfJ8uwiX

***"I dove to the ball, so I ran to the ball and dragged it to me. -"I was just there to secure the ball, but then Kc McDermott started yelling in my ear, 'Sunny, you scored a touchdown. It's a touchdown.' I was like, 'HUH?!'

***The Duke guy, No. 48 [Deion Williams] was trying to put his hands to drag the ball. I was like, 'Dude, there is no way you're going to get the ball from me. There is no shot!'

It's not the first time Odogwu has scored points in a game. In high school, he doubled as a kicker/punter and scored on field goals. He has also played soccer. Odogwu says he was 3 for 3 on field goals as a kicker, and when punting, would just punt for distance.