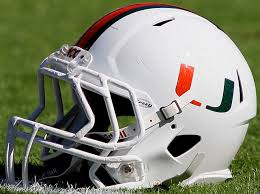 That's how long you have to wait until the Miami Hurricanes meet the Florida Gators again in football.

UF athletic director Jeremy Foley confirmed in a statement Tuesday that UF is partnering with Florida Citrus Sports and ESPN Events to kick off the Camping World Kickoff at Camping World Stadium in Orlando -- today for the last time known as the Citrus Bowl -- to open the 2019 season.

The Hurricanes followed with their own release, saying "the 2019 matchup is the third announced Camping World Kickoff in a multi-year agreement between Camping World, Florida Citrus Sports (FCSports) and ESPN Events, a division of ESPN, to host major neutral-site regular-season games in Camping World Stadium."

Said UM athletic director Blake James: "We are excited to have this opportunity to play the University of Florida in Orlando. There have been so many memorable games between our two institutions and I am confident that all of our alumni and fans will enjoy seeing the two teams square off in the Citrus Bowl."

Tickets will go on sale in 2019, the UM release said, "with Florida Citrus Sports members getting priority access as they do for the annual bowl games and for the 2016 (Florida State-Ole Miss) and 2018 (Alabama-Louisville) Camping World Kickoff games."

For membership information, call 407-423-2476 or go to floridacitrussports.com.

"We are pleased to have partnered with Florida Citrus Sports and ESPN Events to kick off the 2019 season against Miami,''  Foley said in a written release. "Orlando is a great Gator city and we look forward to playing in front of our fans from all over the state of Florida and beyond."

UM alum Marcus Lemonis, chairman and CEO of Camping World and host of CNBC's The Profit, posted a video of himself on Facebook talking about the new naming rights.

Lemonis said in the video that his favorite of the three Camping World openers is "the University of Miami Hurricanes against the Florida Gators. To me it's a throw-down at the 50-yard line between two great schools.''