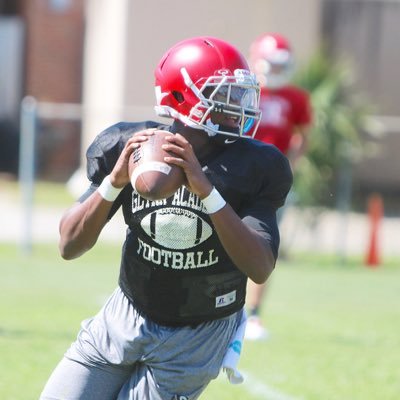 Special to the Miami Herald

The Miami Hurricanes and Mark Richt have landed one of their top targets in the 2017 recruiting class. Four-star athlete DeeJay Dallas from Glynn Academy in Brunswick, Ga. announced Saturday afternoon during a radio show that he will become a Hurricane.

Dallas said he wanted to remain relatively close to home in Georgia -- but not too close.

Dallas, a former Georgia commit after forging a relationship with former Bulldogs coach Richt, is the 12th-ranked athlete and 222nd-ranked overall player in the country according to 247sports. At Glynn Academy, Dallas plays both sides of the football, including quarterback, running back, wide receiver, cornerback and safety. He is the 15th commitment for Miami’s 2017 class, but only the third from out of state.

Dallas will graduate high school in December and plans on enrolling at Miami in January 2017.

Although Dallas said Miami coaches made it clear to him that they plan on using him in a multitude of ways, it appears that he will make his most immediate impact as a receiver. Since taking over the job, Mark Richt has mentioned the need for speed at the wide receiver position – Dallas fits the bill.

“They’ve mentioned a whole bunch of stuff like me starting with the receivers and making my presence felt there and then also playing some defensive back too, while being a return man,” Dallas told the Miami Herald last week. “That’s one of my goals, to be a triple-threat prospect and Coach Richt is fine with that as long as I come in and produce.”

Glynn Academy Coach Rocky Hidalgo recognizes that Dallas’ electric ability is what caught college recruiters’ attention, but he appreciates Dallas for his other qualities on the field.

“For as much as he brings to the field as a player, his most valuable asset is that he is an incredible leader,” Hidalgo said Friday. “He is enthusiastic and infectious as a leader and his teammates just want to catch on to that and go with it.”

Like the coaches at Miami, Hidalgo envisions Dallas as the type of rare talent who can go both ways at the college level.

“He is such an incredible asset in the secondary, but he’s also a guy that I think can play 15-20 snaps on offense and also in the return game. He is such a team guy that he will do whatever his team needs him to do,” Hidalgo said.

His relationship with Richt seems to have separated the Canes from the pack, according to Hidalgo.

“I’ve had a couple of my kids play for Coach Richt and he is the type of guy that you want your son to play for,” said Hidalgo. “He takes care of his players and their parents. His relationship with DeeJay has been tremendously important during his recruitment.”