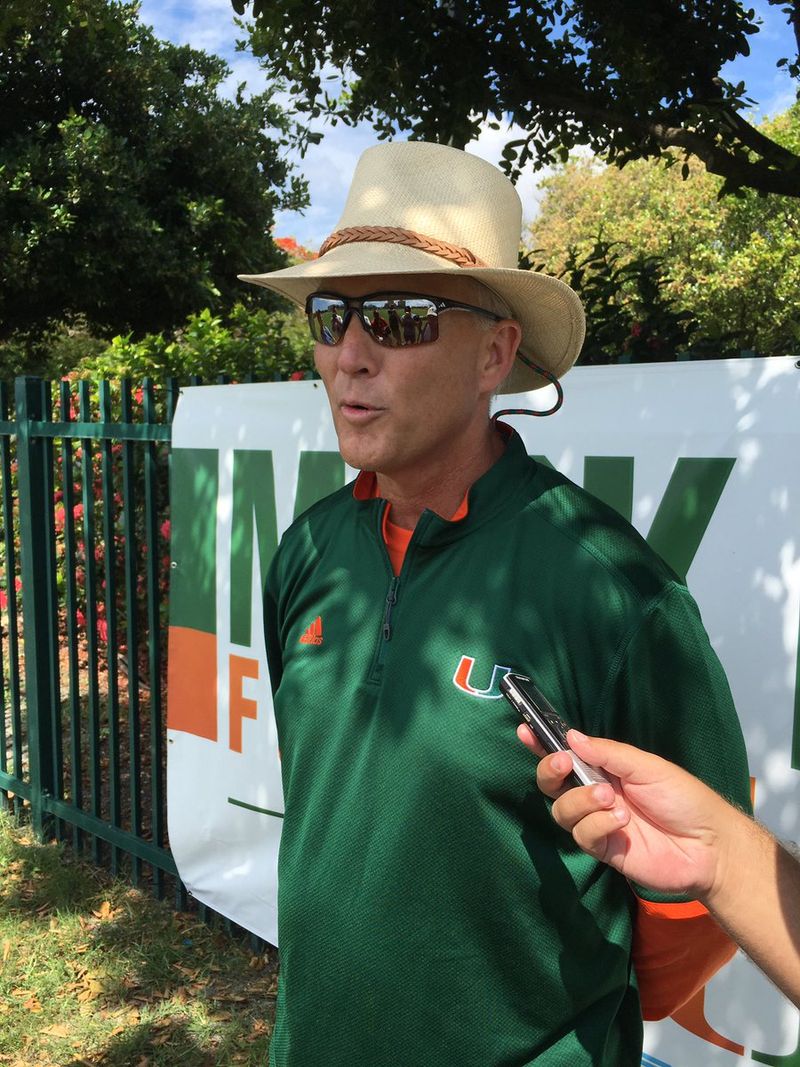 Here's a report by recruiting correspondent Peter Ariz on Mark Richt's chat with the media Saturday morning... (picture above by Peter)

On the third day of the Mark Richt Football Camp on the University of Miami campus, Miami’s coach spoke about the impact of social media on recruiting and assessed how the south Florida recruiting base compares to Georgia’s.

Richt, who was one of the most successful recruiters in the country during his time in Athens, Georgia as the Bulldogs’ coach, believes that the two areas are more comparable than people might realize.

As far as the types of prospects that the Miami staff targets, Coach Richt said there are a certain criteria that they look for in terms of “a height, weight, maybe not necessarily always a 40, but speed, and agility.” If a recruit does not fit exactly what they want, that is not the end of the line in Richt’s eyes.

“If a guy doesn’t quite fit the criteria you have, he’s gotta be a highly productive guy or a guy that has the growth potential to become what you want him to become.”

The emergence of social media has changed recruiting in many ways, but Richt explained that it is a part of the evaluation process for his staff.

“If he’s a guy that we are highly interested in, or we’ve offered, or he’s committed, we watch it very closely,” said Richt.

“I’ve let guys go – at Georgia, there was a kid we had committed and he had stuff on there that really wasn't good. He was representing us so we told him ‘don’t do that’ and then he ‘yes sirred’ us and changed his little handle or whatever you wanna call it and kept doing the same thing. Apparently he didn’t care about what we were saying so we told him we were moving on.”

Richt says that his coaches speak to the recruit’s “head coach, position coach, if they have a strength coach, a team chaplain, the principal, a counselor, teachers in class” and added, “if there’s something you need to find out then you probably will.”

Although a roster full of high character student-athletes is what Richt is striving for at Miami, he understands that no kid is perfect. He explained how they try to prevent issues from arising.

“We try to capture the heart of our guys and tell them we love them. Any rule we have is really based on trying to help you be great. Help you be a great father, husband, citizen, college football player, whatever their desires are,” said Richt. “If they know our motivations then I think they respond well. Rules have never made people behave. Laws have never made people behave. Usually you make good decisions based on what you have in your heart.”