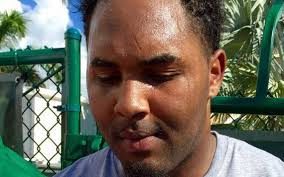 ***When coach Mark Richt was asked after Tuesday’s practice why Gerald Willis, who had a great scrimmage last week, was wearing a scout-team jersey, Richt said, “One of our issues is just numbers. We don’t have any D-linemen. So we have to rotate guys around to make it work.’’

Another issue that Richt didn’t discuss was that Willis is suspended for the opener, as reported by Palm Beach Post and confirmed by the Herald through a source.

That's obviously not the end of the world, as UM should be fine in the opener against FAMU. But it's obviously not good, either. Defensive end Al-Quadin Muhammad is one of the players, in addition to linebacker Jermaine Grace and receiver Stacy Coley, who might receive a suspension to begin the season, in an alleged connection to the luxury car-rental case.

Willis, a 6-4, 285-pound redshirt sophomore who sat out last season after transferring from Florida following various altercations and disciplinary problems, was a 2013 First-Team All-USA by USA Today out of Edna Karr High in New Orleans.

***The Canes were finally in scout-team mode Tuesday, with players preparing for Wednesday’s third scrimmage since practice began Aug. 4.

“I thought it was very well organized,’’ Richt said. “I have to give credit to the graduate assistant coaches and even the guys who were on the scout team. They did a really good job of getting lined up quickly and they gave us a good look.

“For Day 1, it was excellent, and that’s not easy to do. That’s important, because tomorrow those same guys are going to be Florida A&M when we have our little practice game.’’

***Back in “full’’ action for the second straight day, according to Richt, was weak-side freshman linebacker Michael Pinckney, who has been working to mend an injured hamstring.

Pinckney was the first-team weak-side backer, but redshirt freshman Jamie Gordinier, who had been moved to weak-side in Pinckney’s absence, is battling the freshman for the starting spot.

Richt said Darrion Owens, back this camp after sitting out almost all of last season with a torn ACL, “is not likely right now to be a starter, but we just want him to be healthy before he really goes full speed. I’m not saying Owens won’t get a crack at it before it’s over, but right now, that’s what it looks like – [a competition between Gordinier and Pinckney].

*** Freshman receiver Ahmmon Richards is still splitting first-team reps at the X – or split end – position, with Dayall Harris, Harris said. Richards has turf toe, which is a lingering, painful injury, and “missed some practices,’’ Richt said. He's still limited. “He’s not full speed yet, in my opinion. …It’s still bothering him some. Overall, I see him better than he was four or five days ago, so hopefully it keeps moving in the right direction.’’

***Harris praised senior wideout Stacy Coley, calling him “a total package. He’s a first-rounder for sure.’’

***Freshman receiver Dionte Mullins wore pads Tuesday. Harris said he looked sharp out there on Greentree Field. “He looks really good,’’ Harris said. “I can tell he’s a big-time playmaker. They’ve been working him in easy. He’s been getting reps with the threes, and coach put him in with the twos today. He’s playing at Z (flanker). He definitely will be a slot guy, but right now they’re trying to teach him the plays, trying to make him learn a little more of the offense before they just plug him in.’’

***Quarterback Brad Kaaya said he’s “real excited’’ about the opener. “These guys have been ready to play for a while now. Coach Richt was even telling me last week, saying how he wished he played this weekend, because he just can’t wait to get out there. At this point it’s a lot of review, not much about adding new plays.

“We might add a few wrinkles here and there. The guys are just ready to get after and I’m looking forward to it.’’

***Quote of the Day by Richt, talking about the backup QB competition between Vincent Testaverde and Malik Rosier: "If somebody spits the bit or is not a guy who we can trust, we may roll somebody else into that spot."