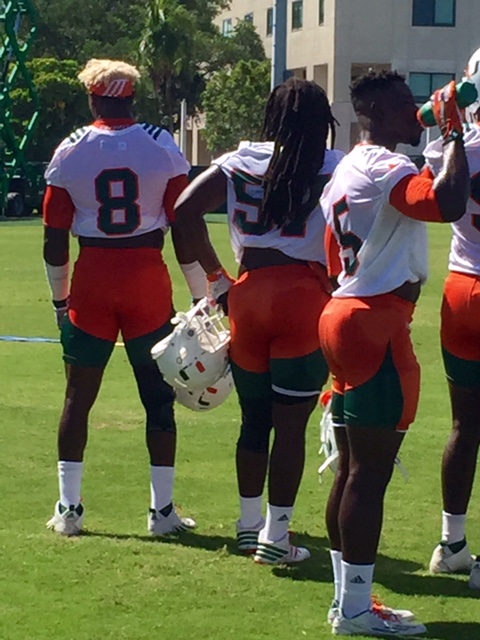 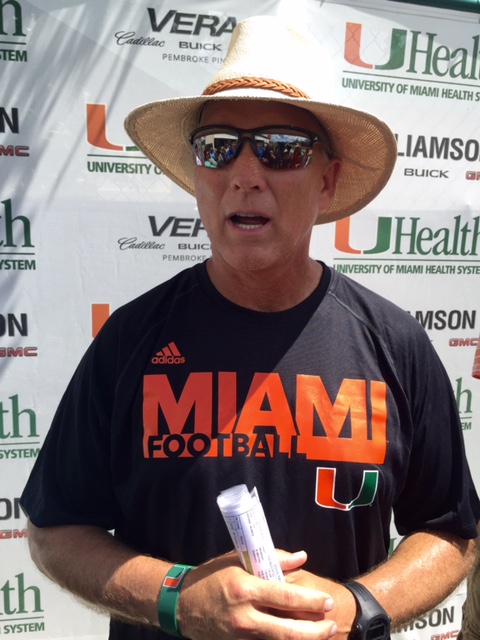 **Freshman DL Tyreic Martin's knee was bandaged and Mark Richt said after practice that he has a knee injury. "A knee,'' Richt said. "Non-surgical injury that will keep him out a little bit.''

*** On giving players off the second session of a two-a-day Friday afternoon:

"To be honest with you, two things - obviously it is smoking hot out here and they've been working in the heat,'' Richt said. "But they've been working well in the heat. Usually by that time, it's Practice 11 or 12 - usually by Practice 10, there's at least one dud in there....just not giving effort, not giving us all they have. I just didn't see that yet. I thought they were working hard, I thought you could see they were fatigued. You want them to fight through fatigue, but you also want to be wise with soft tissue injuries and things of that nature. It looked like a good time to give them a little bit of a break."

*** On percentage of offense that has been installed:

"At this point, 95 percent of installation is in. There will be a reduction when we get to game-planning. I say reduction of total [plays] - we're not going to put in every single play that we ran in the game plan. We'll pick and choose the things we like the best. And there may be a few plays that are specific for an opponent that might be added to it. Overall, let's just say hypothetically there's 100 plays that we've installed, we might have 50 going into a game, 50 of the 100 we've been working all along. And then maybe a couple here and there that are new because of what we see on tape."

*** On how the number of injuries compares with Richt's training camps in the past:

"It has been very, very good to this point. Very few. We had one I.V. on a player and one I.V. on a coach - I won't say which coach [laughs]. I don't want to be bragging about anything because then things happen sometimes, but it's been good overall, I think. There's been nothing catastrophic, nothing season-ending. That's been good."

***On status of UM signee Dionte Mullins, a wide receiver who was on the sideline watching practice Saturday but still isn't enrolled:

"We're still very encouraged about his arrival. We think that's going to happen. We're anticipating that." (Please note that Dionte, when asked today if he would be at Canes practice Monday, told the Miami Herald -- "I haven't heard yet.''  See below)

On if he expects any late additions to the roster via transfer:

"If something popped up, possibly. But right now, there's nothing I would say is pending. Every once in a while, it's like, 'Hey, so and so, he's leaving, look at his tape, find out what kind of kid he is and see if he can fit.' There are still things stirring around the nation. There are some guys that are declaring, 'Hey, I'm a graduate transfer now and finally got a release.' I'd say don't hold your breath on that end, but don't be shocked if it does happen."

On his thoughts on the SEC transfer rule, (re Alabama transfer Maurice Smith being given permission to transfer to Alabama, though Richt wasn't asked about Smith specifically)….

"I didn't even listen. I guess you have to have a waiver in order to make that kind of transfer, is all I know. I kind of stayed out of that. I've unconditionally released any guy that ever wanted to leave, because I think life's too short. I would call the commissioner and say, 'The kid wants to go. Wherever he wants to go, let him go.' I think we had two kids go to Alabama, at least one went to Auburn, maybe two. But I don't put any limitations."

*** Among those exercising on the bikes were CB Ryan Mayes, FB Gage Batten (foot), LB Michael Pinckney (hamstring), S Robert Knowles (right hand/finger), TE Stan Dobard (ankle). Some, such as Pinckney, might have just warmed up and then joined practice. 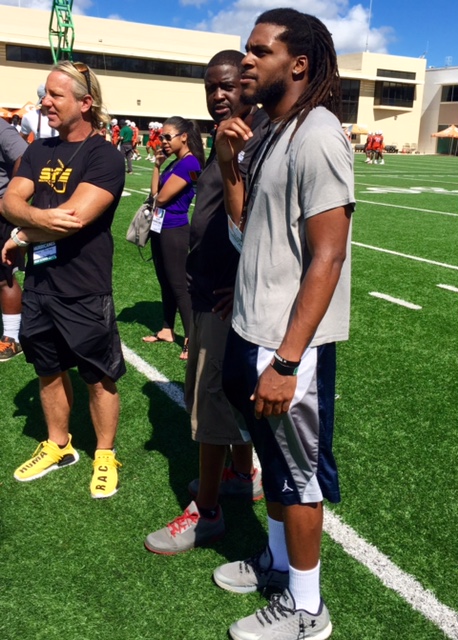 ***Canes signee Dionte Mullins, a much-needed wide receiver, was on the sideline in street clothes. He still has not enrolled or joined the team. Mullins, who was finishing up his summer academics this week, told me he hasn’t heard yet, regarding whether or not he’ll be able to soon join the team.