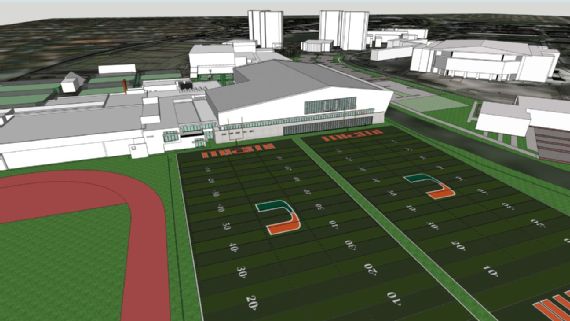 FONTAINEBLEAU Miami Beach (a nice place to be on a Friday night!) -- After months of anticipation, the University of Miami finally unveiled plans for its yet-to-be-built "Carol Soffer Football Indoor Practice Facility," to be named in honor of the mother of lead donor and billionaire Jeffrey Soffer.

Soffer is a South Florida real estate developer and philanthropist who contributed $14 million of the $34 million that will be needed to begin construction -- of which $24 million has already been raised.

Have to give kudos to UM athletic director Blake James, who pulled off the unlikely Mark Richt hiring and has been a real plus for the Hurricanes in pretty much every area.

I know Carol Soffer from years ago, and she is a terrific woman. She has been a UM donor for athletics for more than 20 years. Really liked her sons I met tonight. Jeffrey Soffer seems like a super nice person. Hey, he gave up his money because his mother said UM athletics was the right way to go, and he publicly told her he loved her. As a mom (or son), you've got to like that.

Jeffrey said right away that he has never been to a UM football game but will make sure to attend his first game this season.

That first game, I'm pretty sure, will be Florida State.

Included in Miami's release on Friday:

"The 81,800-square-foot facility will feature two field-turf fields – one 80 yards long and an additional 40-yard field directly connecting to the Squillante Strength and Conditioning Center. The facility will be located on the current football practice grounds, and will feature interconnectivity to the Hecht Athletic Center and the Schwartz Center for Athletic Excellence.

The project includes a 20,000-square-foot football operations center with a mezzanine level that will house all of the football coaches’ office space with views overlooking the indoor fields.  The football center will also feature six position meeting rooms, a head coach’s suite, three coaches’ conference rooms, a first-class football recruiting suite complete with lounges and meeting rooms, as well as a state-of-the-art video center."

UM is aiming for the facility to be completed by the summer of 2018.

Coach Mark Richt has pledged $1 million of his own money to help fund the facility, which greatly impressed his players when they learned of his generosity.

As I said in a blog earlier this week, the Richt era continues to soar. The No. 15 Canes (3-0) are off this weekend but next play at noon Oct. 1 at Georgia Tech (3-1), to be nationally televised by either ABC, ESPN or ESPN2.

It's not a coincidence that Richt's arrival in Coral Gables has already catapulted the football program to a happy place it hasn't been in years.  It's amazing how one man and what appears to be an excellent coaching staff can make a difference.

Richt said tonight that Brad Kaaya's knee injury that he sustained during the Appalachian State game was a bone bruise and was healing day by day. He said the open week was helpful because it obviously has given it more time to heal.

Kaaya was great, as usual. First-class young man, so unassuming and forthright.

"It is awesome to actually get out and see the Hurricane Club members and meet the Soffer family,'' Kaaya told reporters. "In years past, people talked about the Board of Trustees, our alumni, our boosters. It all just sounds like up there somewhere in some castle, some secret meeting room.

“It’s nice to actually meet them and know they have our back and are giving their full support to us. It’s huge for me to see this. It’s a great day.’’

Here's my full, final-edition story that is now online and includes cool videos, photos, reaction and all the news: http://hrld.us/2dqdBjc .

Have a great weekend everyone.