University of Miami Coach Mark Richt: 'Let's send our seniors out in style this Saturday!' 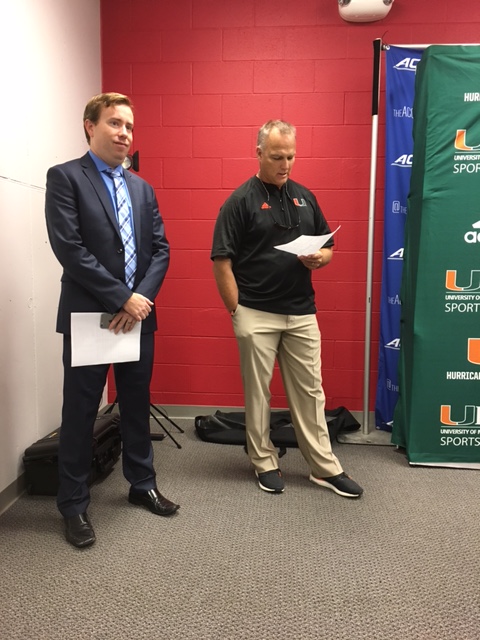 Unlike his predecessor, University of Miami football coach Mark Richt (above, right, with assistant athletic director for communications Tom Symonds) is gung-ho when it comes to rallying the fans for what he believes is a good cause.

And one of those causes is Miami's final regular-season game Saturday against Duke at Hard Rock Stadium.

"Calling all CANES!!'' Richt posted Monday afternoon on Twitter. "Let's send our seniors out in style this Saturday at Hard Rock Stadium! Kickoff 3:30! Be early for the SRs!! UFamily!"

Earlier in the day, Richt told WQAM on his weekly radio show that he knows "the fans are going to honor our players and especially our seniors'' Saturday. "We've already played two Senior Day games,'' he said, "one against Virginia and one against NC State and we won both of those. So we've got to win one more of those games and send our guys off the right way.

"It's bigger than you think.''

Calling all CANES!! Let's send our seniors out in style this Saturday at Hard Rock Stadium! Kickoff 3:30! Be early for the SRs!! UFamily!