Dancing, laughing, playing -- and a little trash-talking -- at 'Give Kids the World Village.' 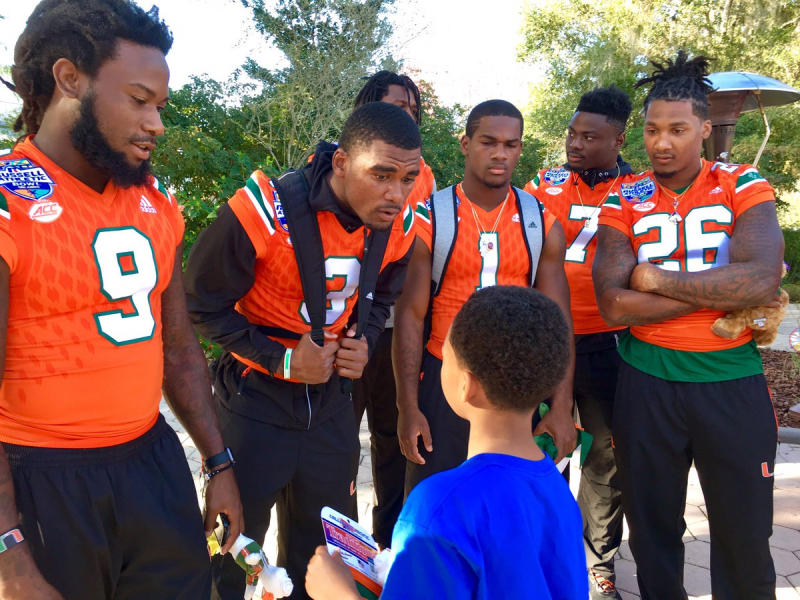 KISSIMMEE – University of Miami safety Jamal Carter and his teammates crisscrossed and high-stepped with an engaging youngster that kept up with them on a sunny Monday in Central Florida.

During a week mixed with business (football) and pleasure (all of it), the Hurricanes and their West Virginia counterparts spent part of the day at Give Kids the World Village.

The 79-acre village in Kissimmee houses more than 140 families with children who have life-threatening illnesses and gives them trips to several nearby theme parks.

“When the kids get to interact with these players who are healthy and the epitome of strength and determination, it kind of gives our families a little extra push,’’

“This means a lot,’’ Berrios said. “One of my baby cousins went through something and was hospitalized most of his life. So, it really hits close to home. I know where some of these families have been.

“Everyone has their problems,’’ senior cornerback Corn Elder said, “but this is something that is definitely life-changing. Some of these kids, they don’t know what can happen the next day. It just makes you appreciate life a lot more.’’

A little boy who was blind used a cane to help him navigate and his hands to feel the fresh flowers decorating the walkway. His parents introduced him to 6-5, 316-pound West Virginia offensive lineman Adam Pankey.

But it wasn’t all humorous.

Although during the event, several Canes could be seen chatting with Mountaineers and even competing in games together, tension escalated as the players got ready to board their buses. A few WVU players began taunting some Hurricanes.

A UM chaperone said the West Virginia players did the baiting, but the last thing anyone wanted was a physical altercation.

UM receiver Stacy Coley was especially livid and tried to return to the scene. A Miami chaplain calmly, but in no uncertain terms, prevented him from going back. Coley couldn’t shake his anger, but finally walked onto the bus.

Despite the shaky ending, the day was mostly a success.

“It’s really eye-opening,’’ said UM middle linebacker Shaquille Quarterman, who “had a blast’’ riding the carousel with a young girl. “I see it as a tremendous blessing for them to get to make my day. But you know, they see it as us making their day.

“I’m just happy I can do something for the community, especially this community.’’