« Hurricanes to face the Aggies home in Miami and "Home of the 12th Man'' | Main | If I'm a University of Miami football recruit's mom or dad, I like this very much... » 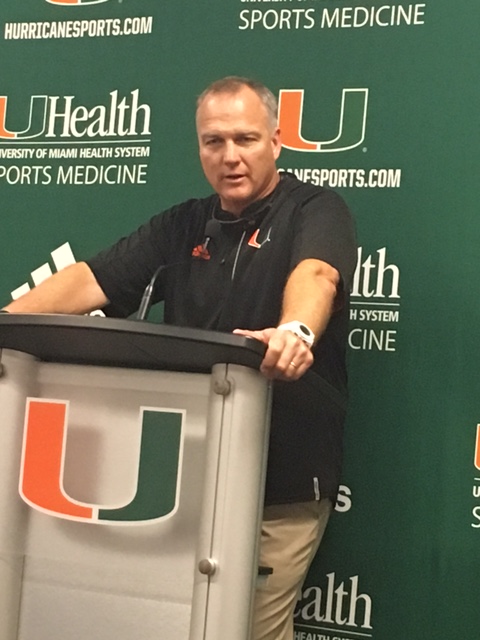 He seems very pleased to be facing West Virginia, and I don't blame him. A victory over a strong 10-2 team that is ranked 14th in the AP poll would firmly put UM in the final rankings.

It's a really good matchup, and I'm looking forward to covering it.

Some Richt comments from our interview:

*** On voting his Hurricanes No. 20 in the final Coaches' Poll: "I think we're a quality team that deserves to be ranked. That ranking will probably be proven right or wrong I guess after this bowl game.''

*** On WVA: "I'm very excited about this opportunity to play in Orlando and to play in the Russell Athletic Bowl. I haven't talked to any of the players. I talked to a couple of the coaches, because we've been doing a little bit of recruiting today. I know everybody is loving this opportunity. We're playing a great football team in West Virginia, a team that just got 10 victories this season. Coach [Dana Holgerson] has done a great job there. Orlando itself is a great town and a great place to have a bowl, because the players usually have a lot of fun things to do. The coaches' wives and kids have a ball too. The coaches tend to work hard in bowls, and don't do a whole lot of the fun stuff, but it'll be a great challenge and a lot of fun for us."

*** On recruiting rules: "We're not allowed to have contact with [prospective] student-athletes during the bowl practices. I think they can be at your bowl practice, but you can't have contact with them. There may be some guys at those practices...we cannot make tickets available to the bowl game either. If they do end up at the game, it'll be somehow other than us providing that opportunity. I hope a lot of them come and watch the game, if nothing else because we're in the state and we're having success. I think that will be good enough.

"Even if they make it to a practice, I think, as far as I can remember, we've never been able to have any contact with them at this time of year. It's usually a dead period. You can't have that kind of contact. But if they can come and watch, that's what we've done in years past."

***On whether he's had conversations with current players deciding on declaring early for the NFL Draft: "We've begun the dialogue. It's a process. It's not a one-time, sit-down conversation. It's more trying to get a feel of where they are and also have them understand the process I've always gone through as head coach - to just let them know that my goal is to help them get as much good, critical information that they can get from the NFL clubs... It's kind of a business decision, but it also becomes an emotional decision too because there are still a lot of things to play for - a possible championship in the future, national awards and the opportunity to get your degree...those are some of the things they'll be weighing when trying to decide what's best for them."

***On UM's schedule this week in terms of working out or practicing:

"They've been lifting, running. The coaches have been recruiting this past week and this week will be more of the same, just making sure we finish strong academically - all the focus is on that. There will be times when they'll be able to slip out and get a workout in. We won't start practicing until our final exams are over. We're debating whether or not to have one this weekend coming up during official visits. We may have a very short, sweet practice Saturday. We haven't finalized that yet. But if we don't, the first one, I believe, will be the next Thursday."

***On how important it is to end the UM bowl drought (last bowl victory was 2006 against Nevada): "It's very important. Our guys know that. Obviously every guy in the room, whether they've been there one year or three or four years, they haven't had the victory at the end of the year. I know they're all hungry for it. I know I am, too. Obviously, West Virginia will be also.''