« Adrian Colbert thankful to be back, and Canes thankful to have him for bowl game | Main | Dancing, laughing, playing -- and a little trash-talking -- at 'Give Kids the World Village.' » 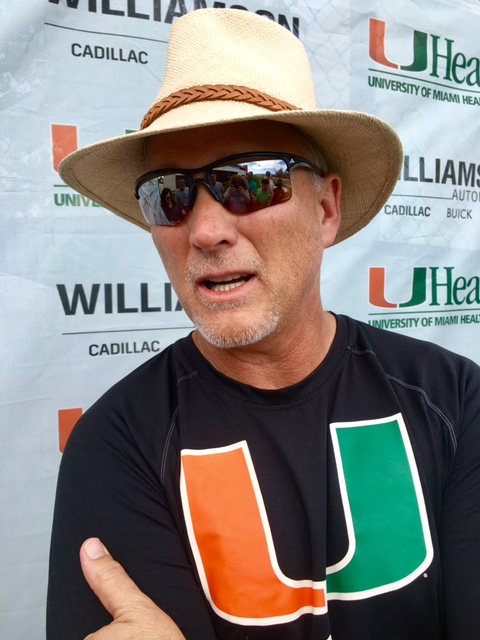 Mark Richt went on WQAM today for an interview with Joe Rose.

Suffice it to say that the part everyone was waiting for was when Rose asked Richt regarding junior quarterback Brad Kaaya and redshirt sophomore tight end David Njoku, "Have you had a chance to talk to them about [what their NFL Draft decisions will be] after this game? Or are you waiting until after this game to have that big 'Should I stay or should I go' discussion?"

"We’ll wait till it’s over,'' Richt replied. "Those guys, really and truly, they want to finish this season well. Then they have to figure out what they want to do. I’m probably more curious than they are sometimes. Brad, especially, well both of them are focused on this game. Let’s play this thing and do the best we can for everybody. I’m really appreciative of the approach they’ve taken with it."

Can you get a feel by their body language or the way they’re acting as well? Rose asked.

"No, I would say they’re enjoying this moment but you never.. I mean, they enjoy it anyway so I can’t tell,'' Richt said. "They’re working hard. They’re wanting to have a great finish of this year and we’ll just see what happens."

Njoku is expected to announce his intention to turn pro after the bowl game. The general feeling among those close to the program is that Kaaya is also leaning -- perhaps leaning very heavily -- toward entering the draft. We'll find out soon enough.

The Hurricanes arrived in Orlando Friday to continue preparing for the Russell Athletic Bowl. Many of them car-pooled and some were trying to arrive early enough to take in a theme park. Miami (8-4) is staying at the Rosen Plaza Hotel. West Virginia (10-2) is at the Renaissance Orlando Resort.

The Russell Athletic Bowl kicks off at 5:30 p.m. Wednesday at Camping World Stadium.