Brad Kaaya to enter NFL: "I am proud to say that I will always be a Miami Hurricane." 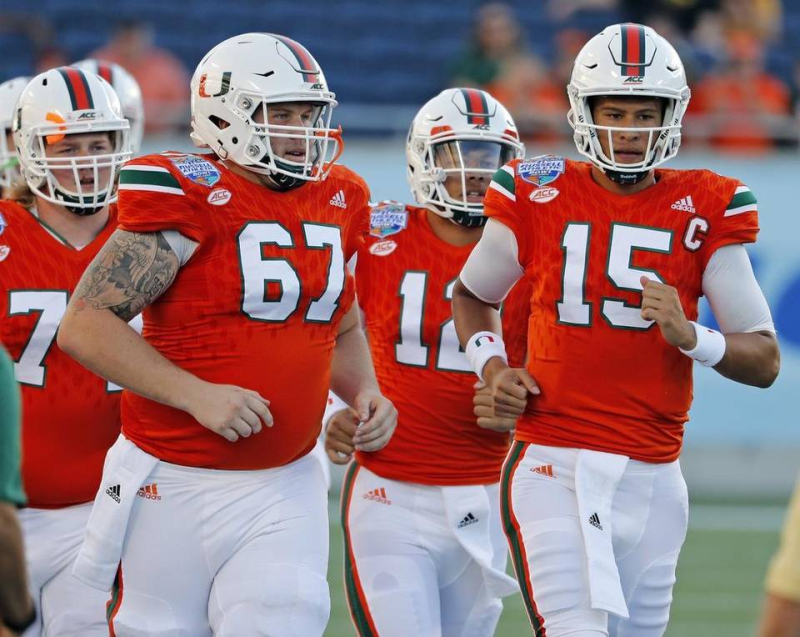 The University of Miami’s record-breaking quarterback has played his last game as a Hurricane.

Kaaya, who has the all-time UM passing record with 9,968 career yards in three seasons, will enter the upcoming NFL Draft, the university announced Monday night.

"While I am looking forward to pursuing my future enceavors, I am going to miss our fans, media, students, administrators, coaches, families, and most importantly my teammates, who were with me through the good times and the tough times,'' Kaaya said in a UM press release. "Attending a University this far from home wasn't the easiest transitions initially, but this program provided me a home away from home ever since my arrival in 2014. Since then I have registered as a resident of Florida and am proud to call Miami my long-term home. I plan to be involved with the University of Miami moving forward as I pursue my degree in communications. I also will give back to this university and South Florida community, two places that had such a positive impact on my life. I look forward to watching Coach Richt and his staff, and our team do even bigger and better things for years to come.

"This was one of the toughest decisions of my life, however, I have zero worries that the U will indeed be back. No matter who is under center next season, I have no doubt in my mind they will have the platform and the resources around them to bring a major championship back to Coral Gables. Miami will forever hold a special place in my heart and I am proud to say that I will always be a Miami Hurricane.''

Although disappointing for most Hurricanes fans, the news was mostly expected. Some folks close to the program believed the 21-year-old junior had been leaning toward turning pro early for at least the latter part of the season, despite not being projected by NFL Draft analysts as a first-rounder.

ESPN’s Mel Kiper said last month that Kaaya should return for his senior season, projecting him to go in the third round, “maybe second’’ if he had a great pro day workout.

Si.com did not have Kaaya last month in its top-40 draft projections, but Bleacher Report draft analyst Matt Miller in his latest mock draft early this week had Kaaya going to the New Orleans Saints in the second round at No. 43 overall -- one spot after UM tight end David Njoku (No. 42 overall to Buffalo Bills), who also declared early.

Miller projected Kaaya as the fifth quarterback to be taken.

Kaaya is incredibly smart and poised. Needs to work on footwork but he has starter traits and wiring. https://t.co/bBEpchPvmn

Kaaya ended his junior season completing 261 of 421 passes (62-percent) for 3,532 yards and 27 touchdowns, with seven interceptions.

In his final five games of 2016, Kaaya threw 14 touchdowns and had just one interception. With his 22 attempts and 14 completions in the first half of Miami’s Russell Athletic Bowl victory against then No. 14-West Virginia, Kaaya became the program’s all-time career leader in both categories – and finished his final game with a flourish, throwing for 282 yards and four touchdowns .

Kaaya took his share of pounding during UM’s four-game, mid-season slide, and likely wants to protect his body for his NFL career.

The last UM quarterback to be drafted was Ken Dorsey to the San Francisco 49ers in the seventh round of the 2003 NFL Draft.

“I’ve got some soul-searching to do,’’ Kaaya said after he was named Most Valuable Player of the Russell. “Got to talk things over with Coach [Mark] Richt, [quarterbacks] coach [Jon] Richt, some of my teammates, some of the guys who are coming back next season, and then talk to some of my former teammates as well, some of the guys who have left. Get some opinions, talk to a couple of mentors of mine, just gather all the information and then make a decision from there.

“…Regardless of if I’m here or not next season, I think this team is headed to greatness. There are a lot of good things going on, and a lot of progress has been made. This team will be good regardless of what happens over the next few days.’’

Kaaya was asked after the bowl if there was anything left for him to do at UM.

“Definitely,’’ he said. “I think it’s every kid’s dream when they get to college to win the national championship….”

Now, the biggest question to face the Hurricanes: Who will be Kaaya’s successor?

Battling for the job will be backup Malik Rosier, a redshirt sophomore who threw four passes (two completions) for 32 yards in six games this regular season heading into the bowl game. Rosier, who is quick and loves to run, has rushed twice this year for 65 yards.

Rosier, who quit UM baseball before last season to concentrate on football, delivered a clutch performance against Duke when Kaaya had a concussion, completing 20 of 29 passes for 272 yards and two touchdowns in the victory.

Other quarterbacks expected to compete for the starting job next season are Evan Shirreffs, a redshirt freshman who played sparingly with no stats on Nov. 19 at North Carolina State; Vincent Testaverde, a redshirt sophomore who had not gotten game action in the regular season; and freshman Jack Allison, a former consensus four-star prospect who played on scout team this season.

UM also is expecting two newcomers: four-star commit N’Kosi Perry, out of Ocala Vanguard and rated among the top dual-threat quarterbacks in the nation; and three-star commit Cade Weldon, out of Tampa Jefferson and the son of former FSU quarterback Casey Weldon, who was coached by Richt when he was an assistant at FSU.

The 6-4, 215-pound Kaaya, out of Chaminade Prep in Los Angeles, earned the UM starting job as a true freshman in 2014 after former quarterback Ryan Williams tore his ACL the previous spring. Kaaya threw for 3,198 yards and 26 touchdowns with 12 interceptions his first season, earning Atlantic Coast Conference Rookie of the Year.

In 2015 as a sophomore he threw for 3,238 yards and 16 touchdowns with five interceptions.

Thank you to everyone who was a part of my journey, I will be a Miami Hurricane for life!