Aarón Sánchez hosted the inaugural Tacos After Dark party, poolside at the Loews Hotel in South Beach on Thursday, along with Casamigos tequila and Smithfield. Miami chefs were well-represented. Among the 16 taco-slingers were hometown favorites Todd Erickson, Ingrid Hoffman, Aaron Brooks and others, while out-of-towners ranged from Todd English to Alex Stupak of New York's Empellón. There was also a who's-who of Miami and celeb chefs in attendance, including Giorgio Rapicavoli, Michael Schwartz and Bradley Kilgore, as well as Food Network personalities like Ted Allen, Marcus Samuelsson and Marc Murphy.

What worked: Great party overall. The shindig was a manageable size with a good crowd, and it was totally feasible to casually sample all of the tacos over the course of the night without leaving with a bellyache. Mexican hot chocolate provided by Loews was the perfect warmup (and sweet treat) for a record-tying chilly night in South Beach.

What didn't work: Really not much to complain about. Some of the specialty Casamigos cocktails were running out around midnight, but the tequila was still flowing and there was never much of a wait to get anything. The line to enter the event took about 10 minutes at the party's start, but dissipated quickly after that.

The best thing we ate: This is a tossup between two Todds, Erickson and English, who put out two of the most original and tastiest tacos of the evening.

Erickson's chorizo and calabaza taco with goat cheese and fig salsa was deliciously balanced between the spicy, hot chorizo and mellow, sweet goat cheese, and the soft corn tortilla was perfection. Topped with pretty edible flowers, he wins the award for most photogenic taco, hands-down.

English put out a soft-shell crab taco with hot pepper jelly, pork belly, black bean mash and crispy jalapeño slaw. It was such an unexpected flavor profile that made you want to go back bite after bite--an unexpected New England-meets-Southwest taco, perfectly crispy and hot, and the black beans surprisingly tied it all together.

Quote of the night: "You've got a restaurant in Kansas City? I'm from Kansas City. I'm a chef here in Miami now," Bradley Kilgore said, introducing himself to Aarón Sánchez. This led to a firm handshake and a little celeb-celebrated Miami chef commingling. It was fun to see the camaraderie among the Miami chefs and their celebrity counterparts throughout the evening.

The craziest thing we saw: Nothing too loco, although I was entertained by pretty-boy chef Todd English holding court to a constant stream of beautiful women wanting their pictures taken with him. He's got a bit of a bad-boy rep, so I was tickled to watch him in action. 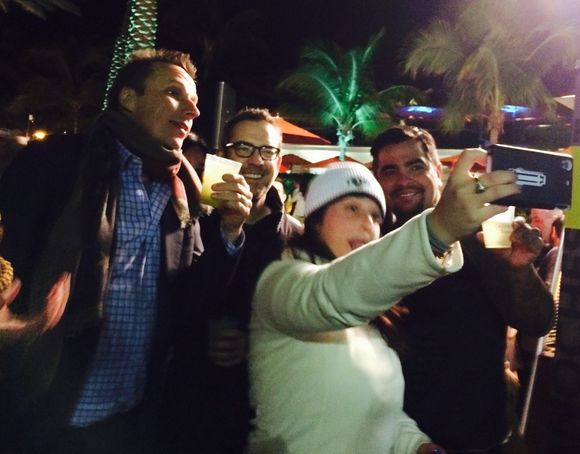