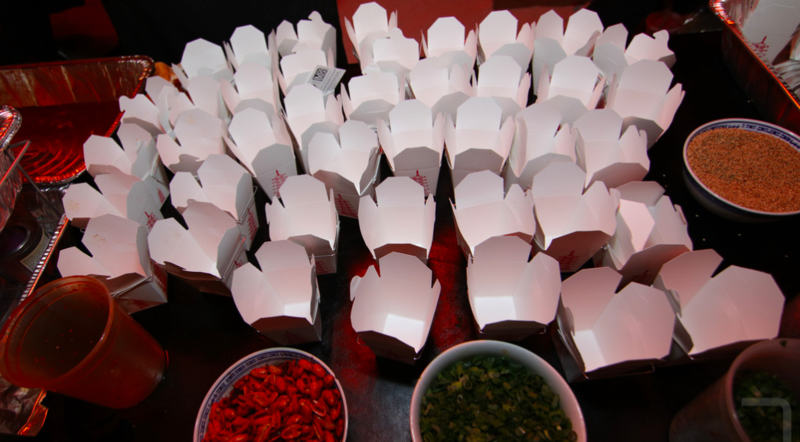 Andrew Zimmern, the affable host of Travel Channel's Bizarre Foods with Andrew Zimmern, is also the traditional host of the South Beach Wine and Food Festival's Sunday sendoff event. Best of the Munchies was replaced this year with Lucky Chopsticks, and patrons were treated to an array of Asian bites. Zimmern joined the excellent rock cover band stage, as well. 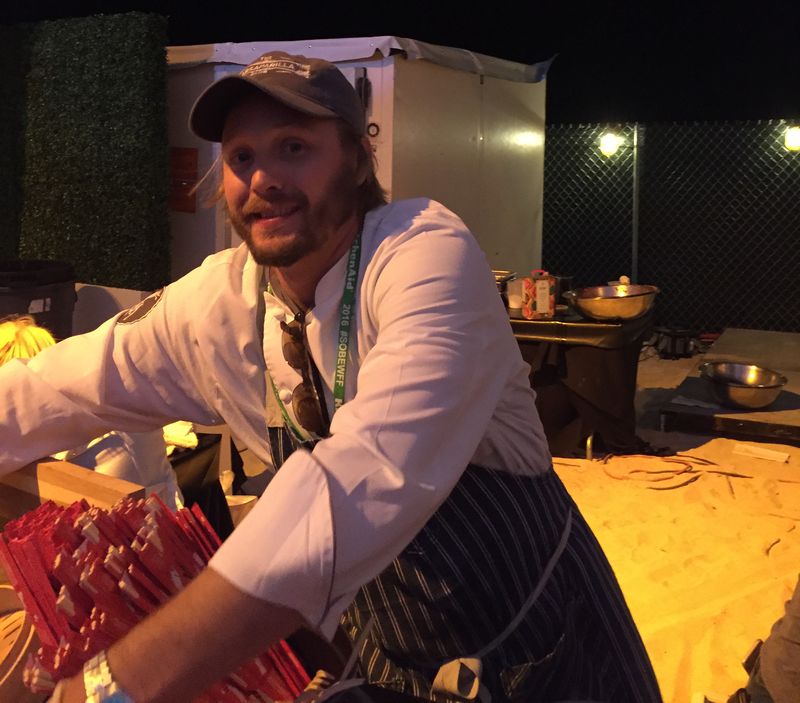 Jeff McInnis (above), original Yardbird chef, is back in Miami with partner Janine Booth at Sarsaparilla. They served root vegetable tartare.


Our Grade: B- (Plenty of good food, but lines were too long). 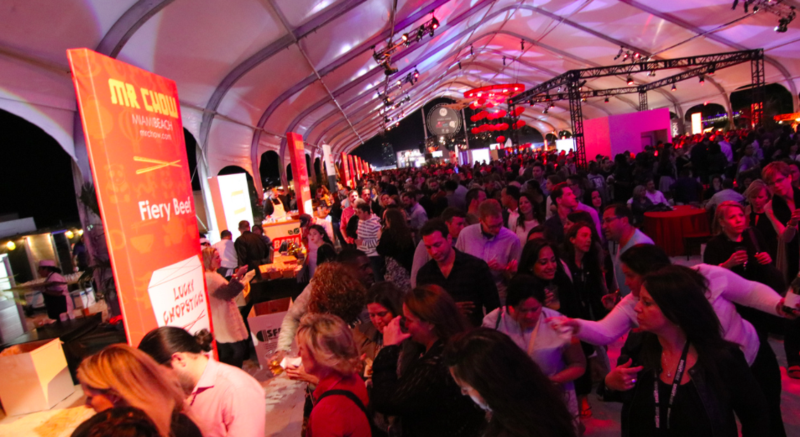 What worked: Wine selection was more varied than in previous Sunday night events, and they didn't run out.

What didn't work: Long lines prevented anyone from trying everything, really. 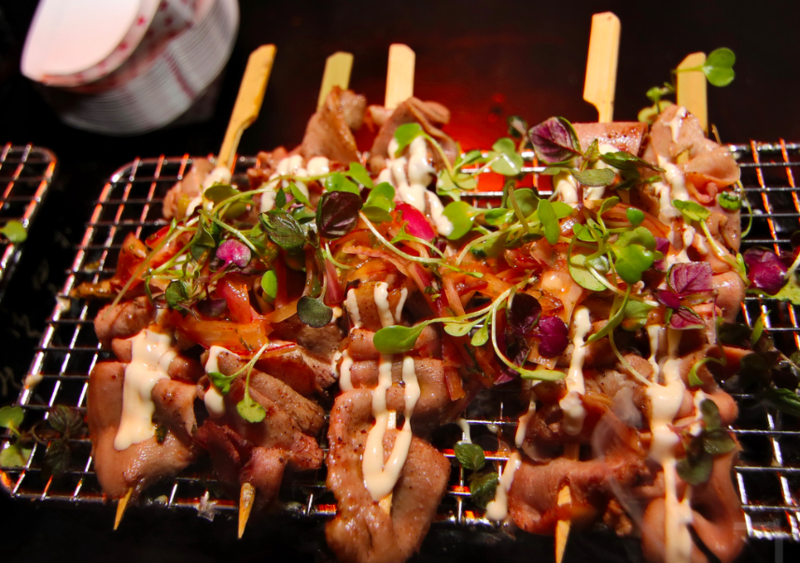 Best thing we ate: Fiery beef from Mr. Chow was a hot, aggressively spicy and tender bite. Runners-up: Janine Booth and Jeff McInnis, back on the scene with Sarsaparilla, served up a delicious vegan root vegetable tartare that had intense flavor and a meaty nonmeat texture. Finka Table and Tap had the longest lines for its Korean fried chicken with Gochujang sauce.

Quote of the night: "They shouldn't have offered the Groupon for this event. Too many people." 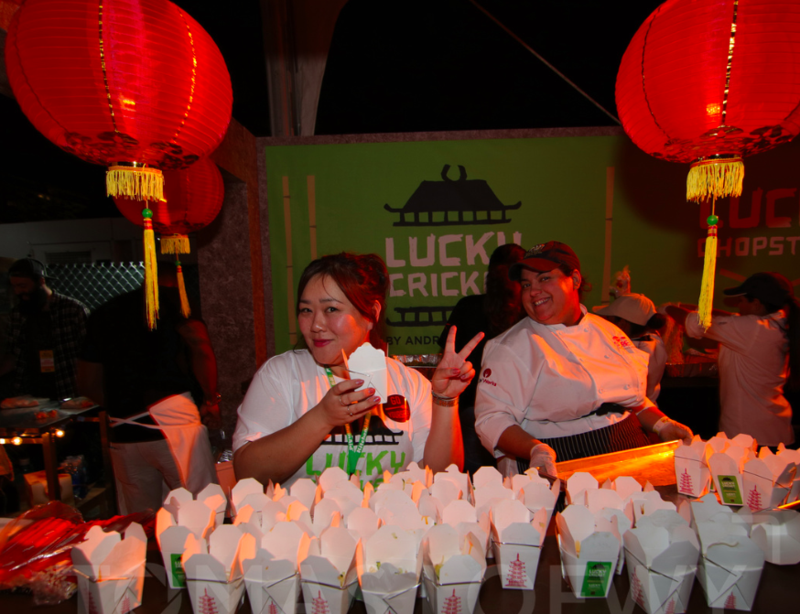 Craziest thing we saw: Patrons waiting for Korean fried chicken complaining to security that people were darting into the front of the half-hour line. Which they were.

BY KENDALL HAMERSLY | khamersly@MiamiHerald.com | Photos by Tomas Loewy for Miami.com

Posted by Miami Herald at 9:50 AM in Food and Drink | Permalink | Comments 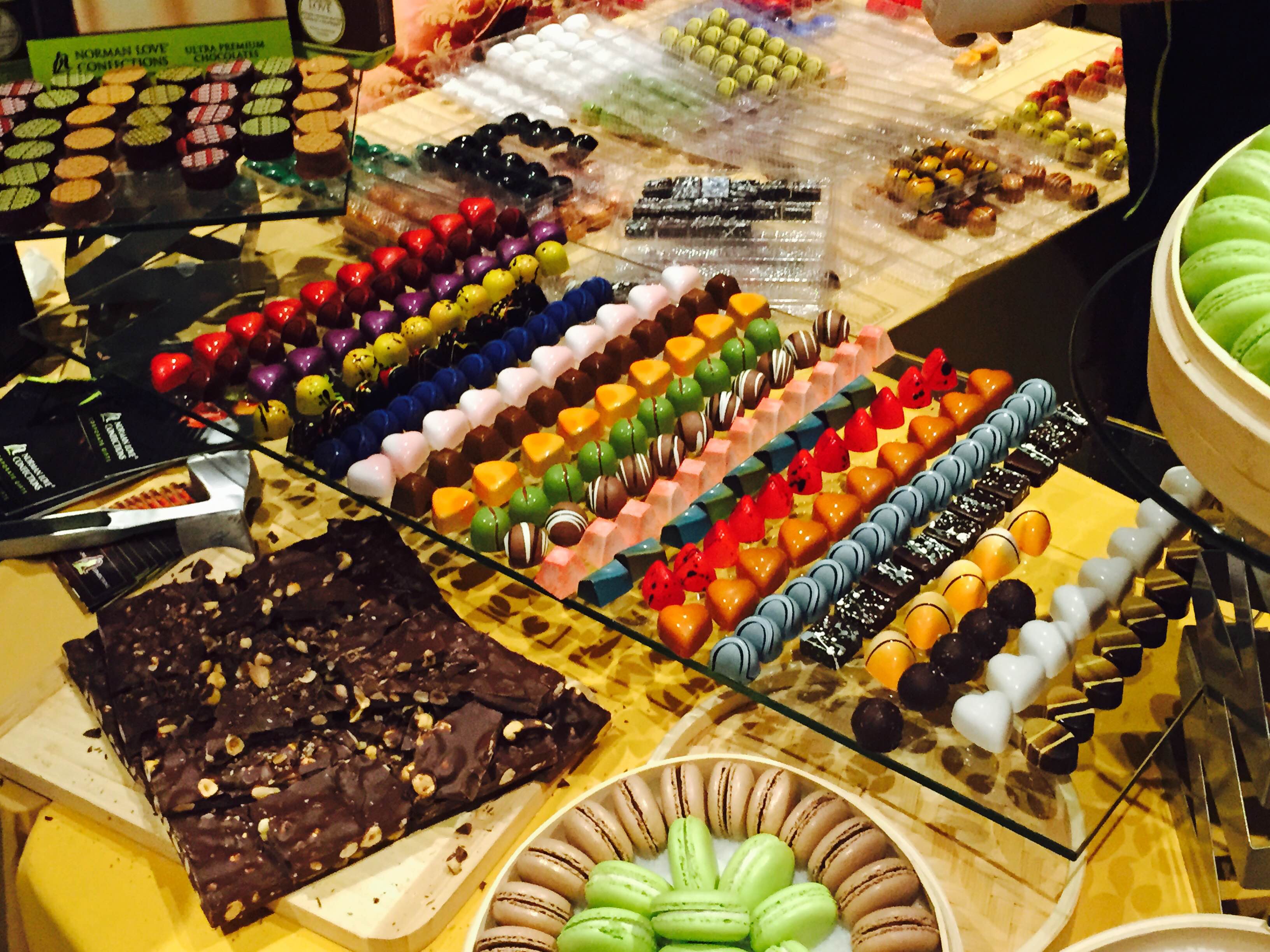 Famed ex-Miami sugarsmith Hedy Goldsmith was back in South Beach Saturday night at Sweet 15, a South Beach Wine & Food Festival dessert party hosted at the former Versace mansion by Ace of Cakes Duff Goldman. Goldsmith, who left Miami for Los Angeles last year, whipped up a Thai lemongrass popsicle with basil that stood out among the sweet treats on offer.

Our grade: B (Would go back next year, with improvements). 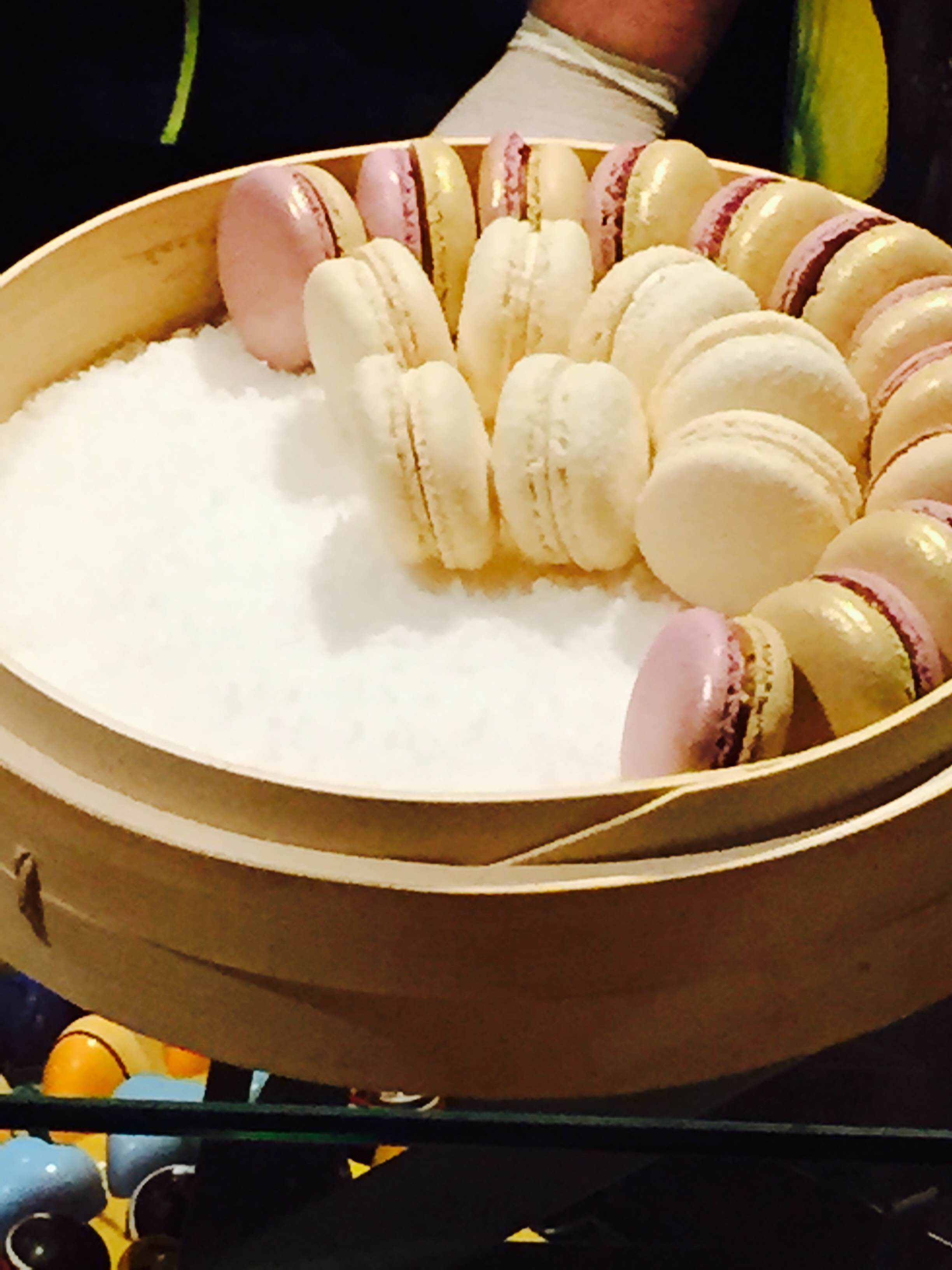 What didn't work: A lack of between-table palate cleansers -- with the intoxicating exception of alcohol -- meant sweet tastes built up on each other into a cloying overload. Some well-timed sorbet or cheese would have helped. But hey, it's a dessert party. 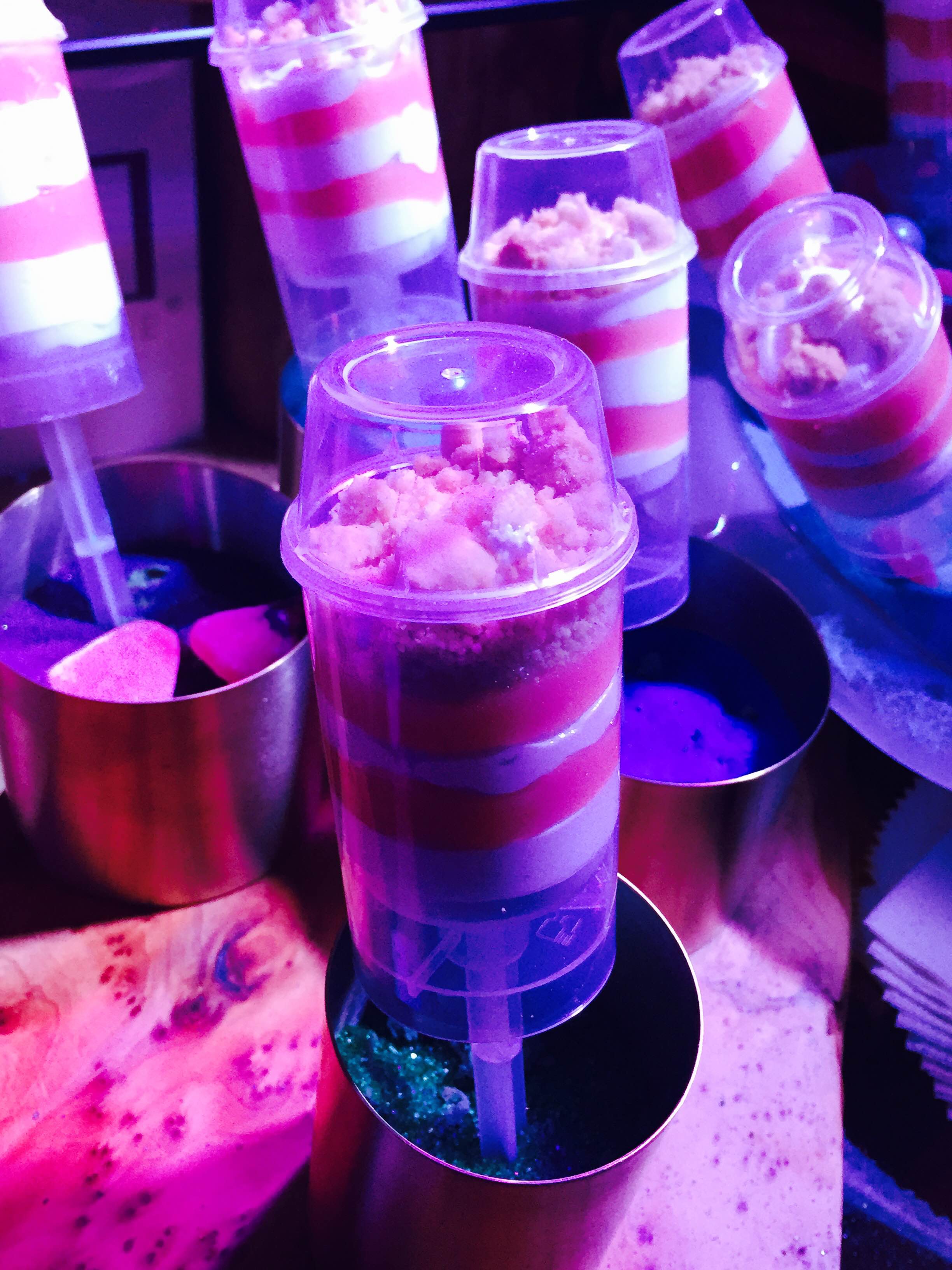 Quote of the night: "I just bake. It's what I do." (Hedy Goldsmith) 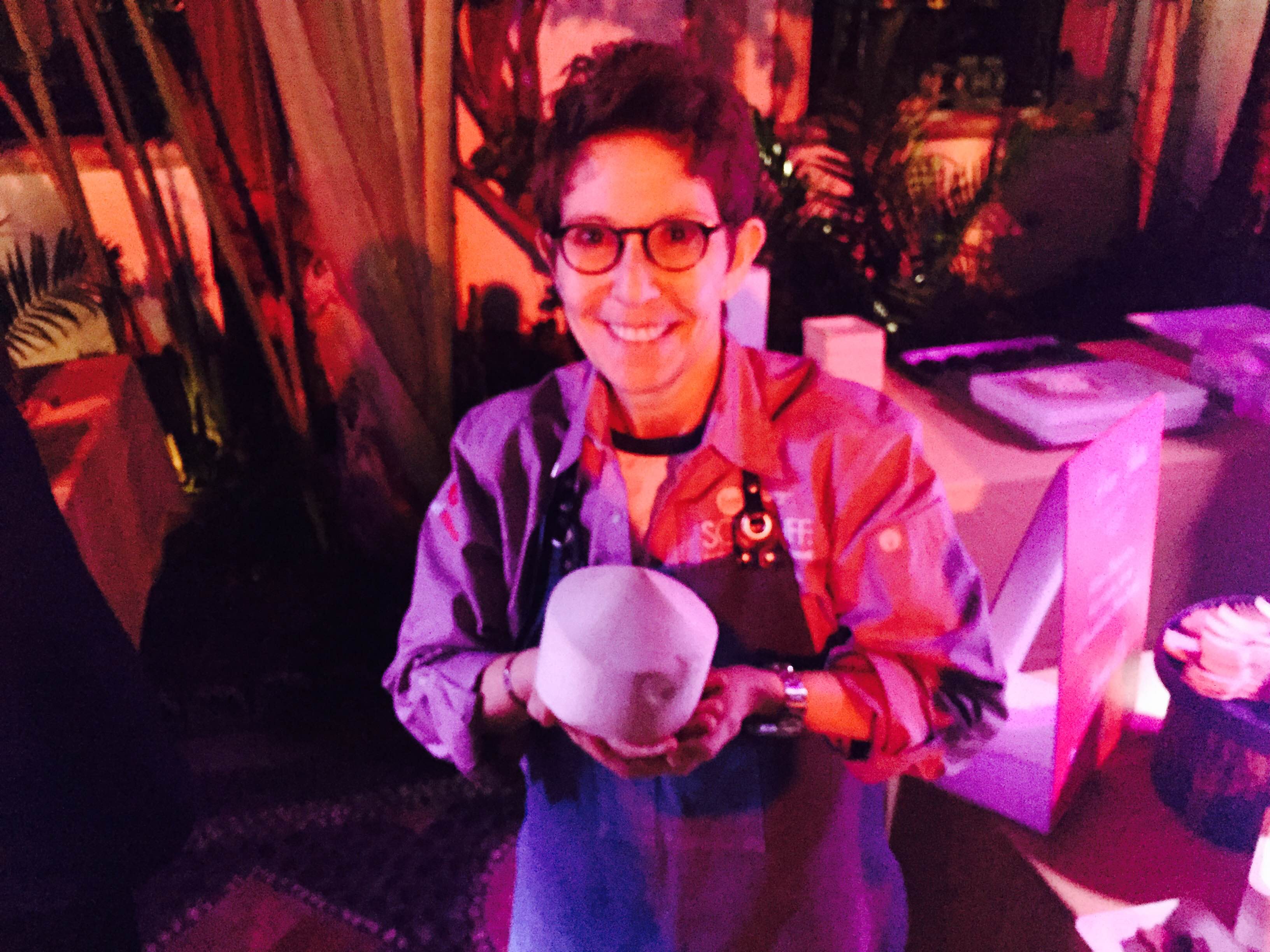 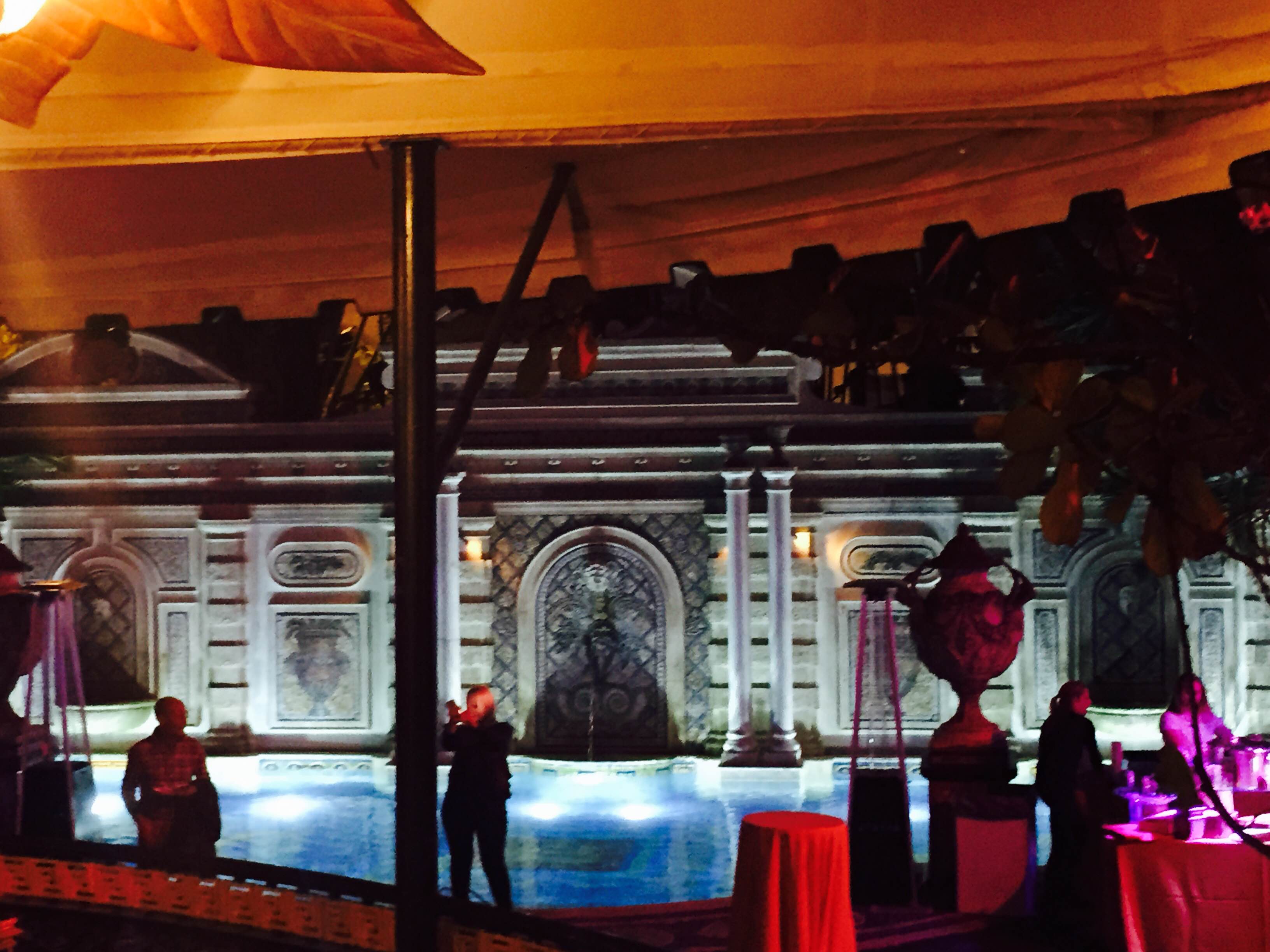 Podcast: Listen to Hedy Goldsmith talk about making desserts with California medicinal marijuana, about her famed Junk in the Trunk Cookies and more in our Miami.com Uncorked Podcast.

Posted by Miami Herald at 9:12 AM in Food and Drink | Permalink | Comments 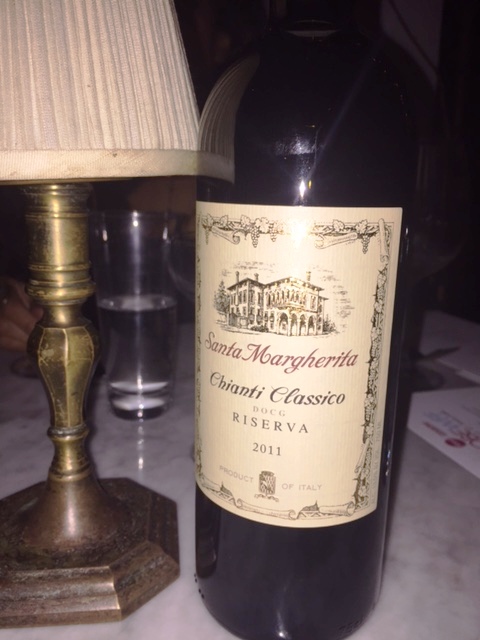 Our Grade: B. (Would go back next year, with improvements)

What worked: The atmosphere in Cecconi's covered courtyard was wonderful as usual with romantically lit trees and black-vested servers working together seamlessly to keep glasses filled and courses coming out. If anything, it seemed like just another night at Cecconi's that Nigella just happened to stop by. Wines for the night were courtesy of Santa Margherita and worked well with the hearty Italian food, especially the Chianti Classico Riserva (pictured), a nice change from the brand's wildly popular pinot grigio.

What didn't work: The sense that something special was happening. As an accomplished author and host, Lawson could have imparted more of her personal touch and content to the event. She gave a short intro that didn't really do much to set the tone and then proceeded to sit at her table for most of the meal. Around the end of dessert she graciously made her way around the room chatting with guests and patiently posing for pictures, but we all know she has so much more offer than fodder for selfies. A little info about the dishes, their inspiration, why she chose them, etc., would have gone a long way to creating a meaningful experience for diners who paid $250 a person.

Quote of the night: "Her skin is like porcelain." (referring to Lawson's dewy complexion)

Craziest thing we saw: Honestly, this was one tame event.

Posted by Miami Herald at 8:40 AM in Food and Drink | Permalink | Comments 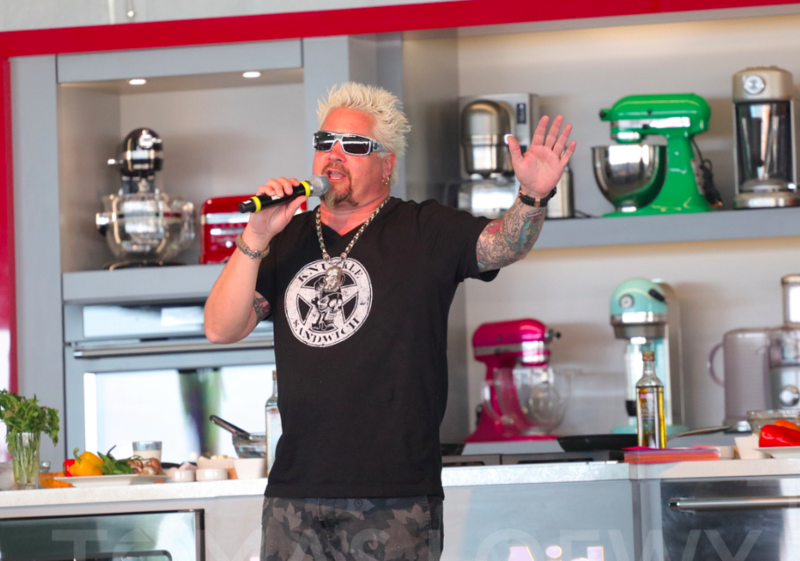 Finding drinks would not be a problem for Fieri's contestants, whom he divided into two teams: Sweet with Amanda Freitag, Jose Garces and Geoffrey Zakarian; and Sour with Scott Conant, Alex Guarnaschelli and Aarón Sánchez. "Let's get started with some cocktails!" he cried as each chef got their glass. 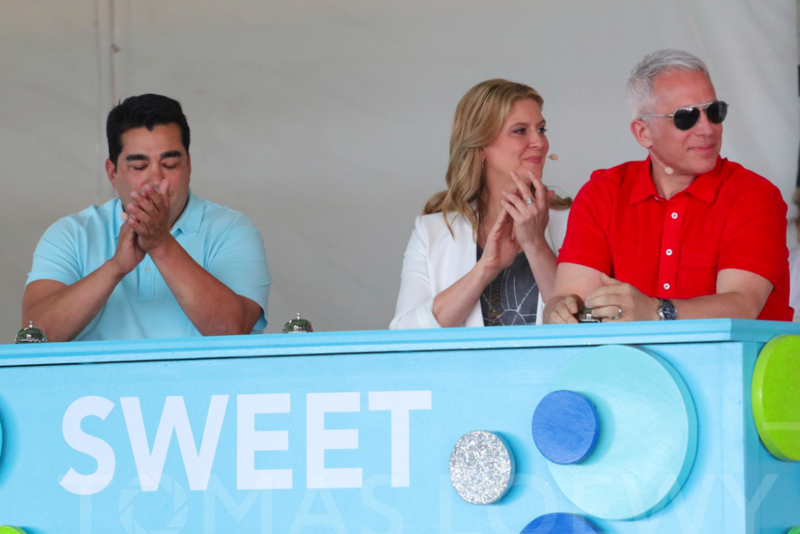 What worked: The hilarious kitchen trivia and physical challenges like preparing an omelet blindfolded (Sanchez won with his "Omelet a la Sanchez") and making a margarita using ingredients buried in a box of slime. For the final game Fieri enlisted Marc Summers, host of '90s gross-out game show "Double Dare," to help out. 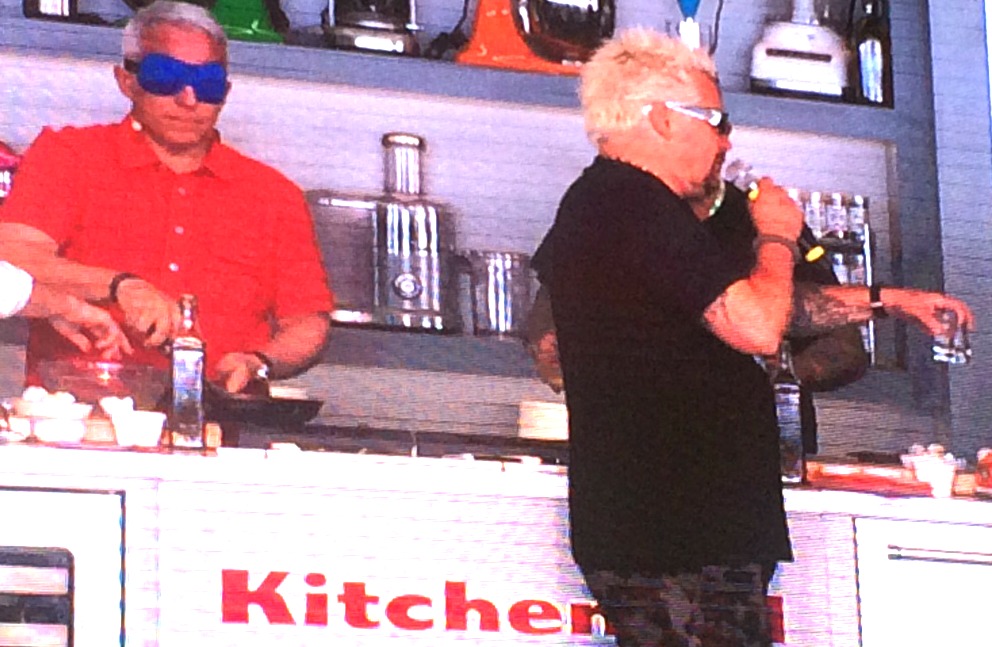 Losing teams would chose which audience member had to take a shot. "It's not fun if they actually want the shot!" Guarnaschelli noted. 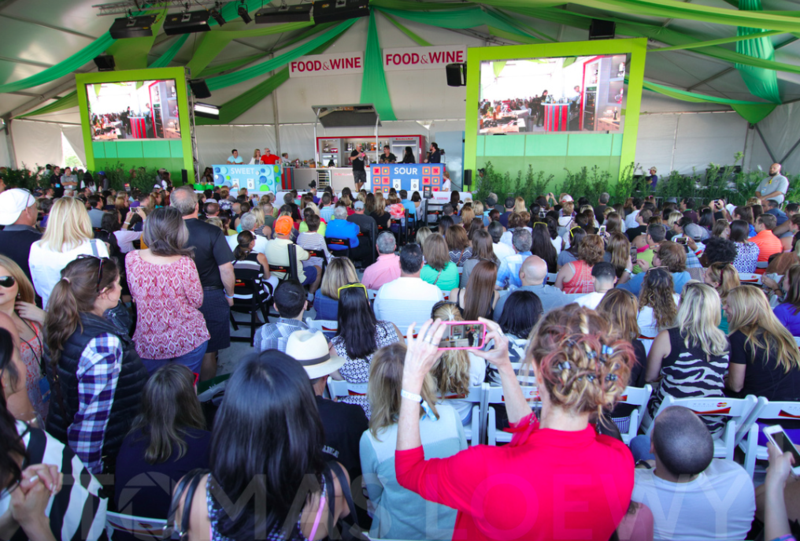 What didn't work: Some corporate suit tried to put the kibosh on the rampant shot distribution. That didn't seem to work.

Quote of the night: "This looks like goblin piss!" Aaron Sanchez said of team Sweet's margarita. He still drank it.

Posted by Miami Herald at 8:33 AM in Food and Drink | Permalink | Comments

Croquetas chic out in the Design District with Jean-Georges Vongerichten 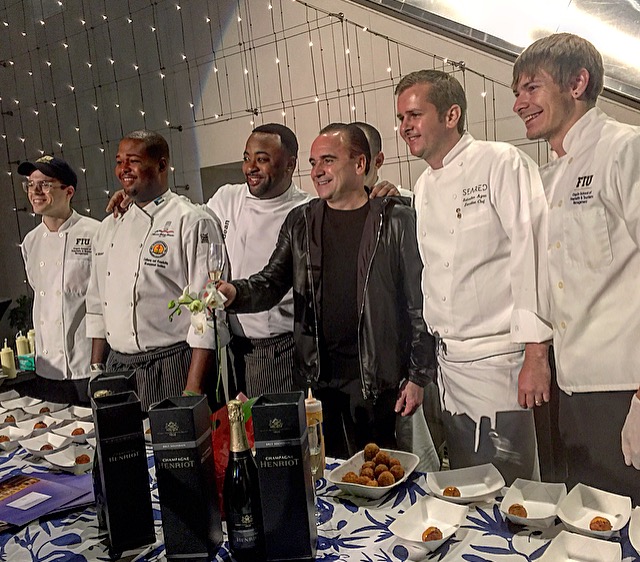 Vongerichten with chefs from his One & Only Club resort restaurants in the Bahamas and Mexico.
​
​Our Grade: B (Would go back next year, with improvements)

What didn't work: How many croquetas can you eat without feeling like you've just been dipped into a fat fryer? 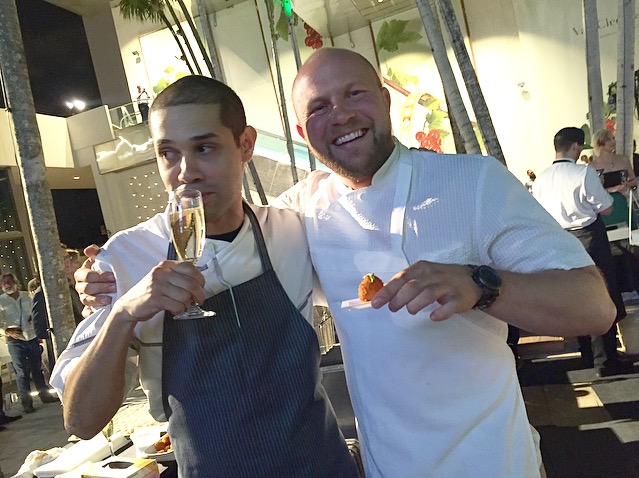 Matador sous chef Harry Capacetti with Matador chef de cuisine (and Top Chef contestant) Jeremy Ford.
​
Quote of the night: "This is the best thing you'll put in your mouth all night. No? OK, the second-best thing." -- Tucker Duke's owner-chef Brian Cartenuto as he offered a spectacular croqueta ball filled with hot bourbon cheddar cheese in a penny-side puddle of pepper jelly vinaigrette with micro radishes and black salt. 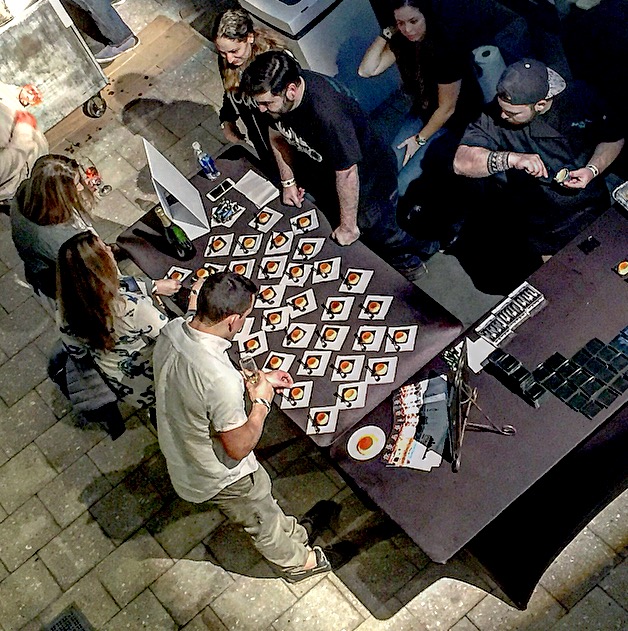 Craziest thing we saw: Our favorite Miami lunch-counter window replaced by Fendi, Cartier and Piaget as the backdrop for a croqueta snack.

Posted by Miami Herald at 1:25 AM in Food and Drink | Permalink | Comments

What worked: Incredible flavor pairings, copious amounts of sake and wine, and an increasingly funky soundtrack by the legendary Felix Da Housecat kept spirits up all night long.

What didn't work: There was a lot of alcohol for such dainty portions - lightweights, beware.

Quote of the night: "We started in Japan, but we're ending this in Funkytown. Get it, Felix." (Overheard)

Posted by Miami Herald at 12:33 AM in Food and Drink | Permalink | Comments

Michael Symon has a cow at Meatopia in South Beach

Cleveland's most famous carnivore, chef Michael Symon, was the affable host for the South Beach Wine and Food Festival's Meatopia, the New York-born flesh fest that started partnering with the festival last year. 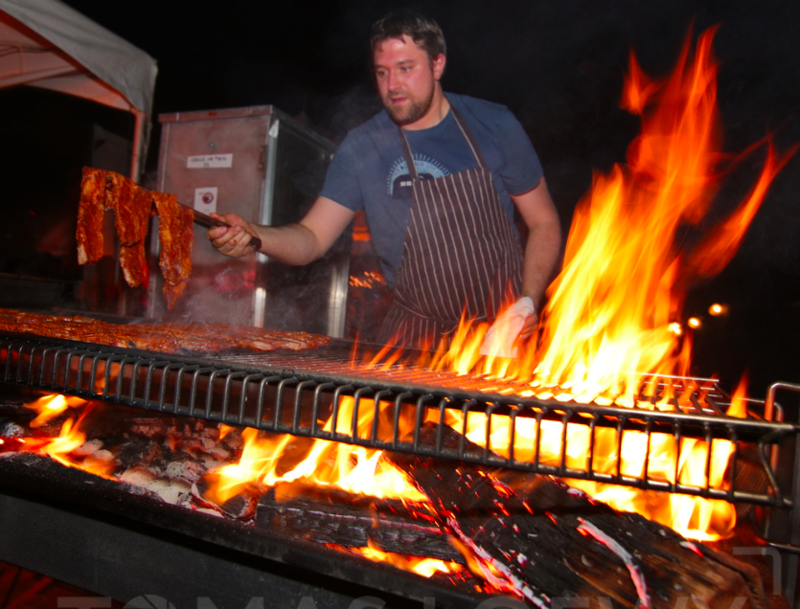 Our Grade: A (good eats, good variety, bourbon, Gregg Allman in concert: What more can you ask for?) 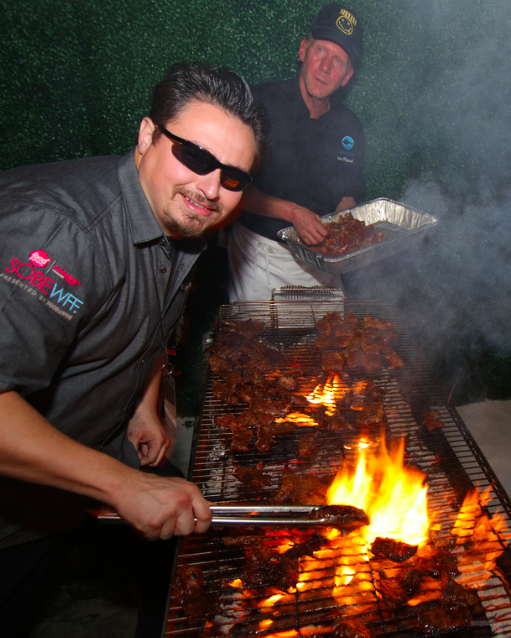 What worked: Unlike at some other SOBEWFF events, almost all of the chefs brought enough food, and people were happily eating plenty in the last half-hour of the event.

What didn't work: A few chefs served ultra-rare slabs of steak, which while top quality and full flavored were nearly impossible to eat with a plastic fork in a cardboard tray while balancing a bourbon. 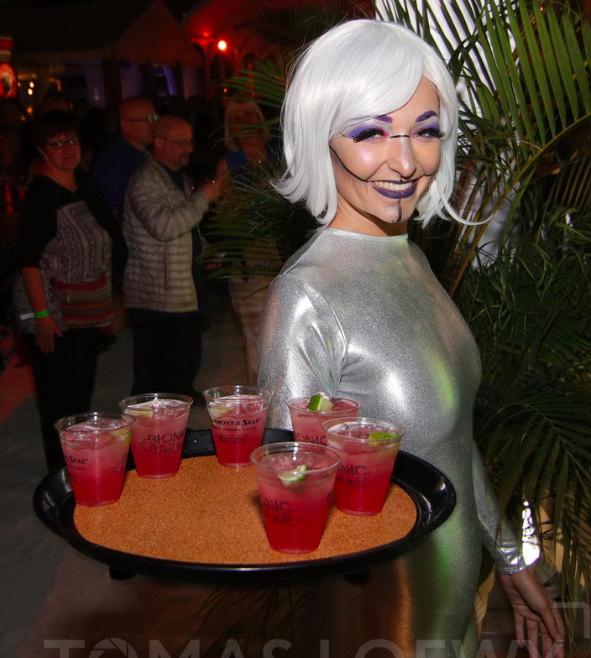 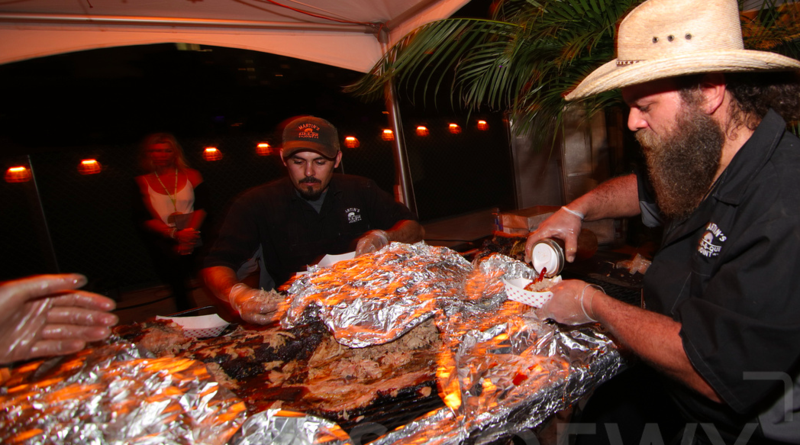 Quote of the night: Overstuffed patron to wife/girlfriend/sister, upon walking out, says, "You wanna get somethin' to eat?"

Craziest thing we saw: Pat Martin's crew drives a massive black smoker truck loaded with pigs down each year, and it's establishing itself as the official vehicle of Meatopia. 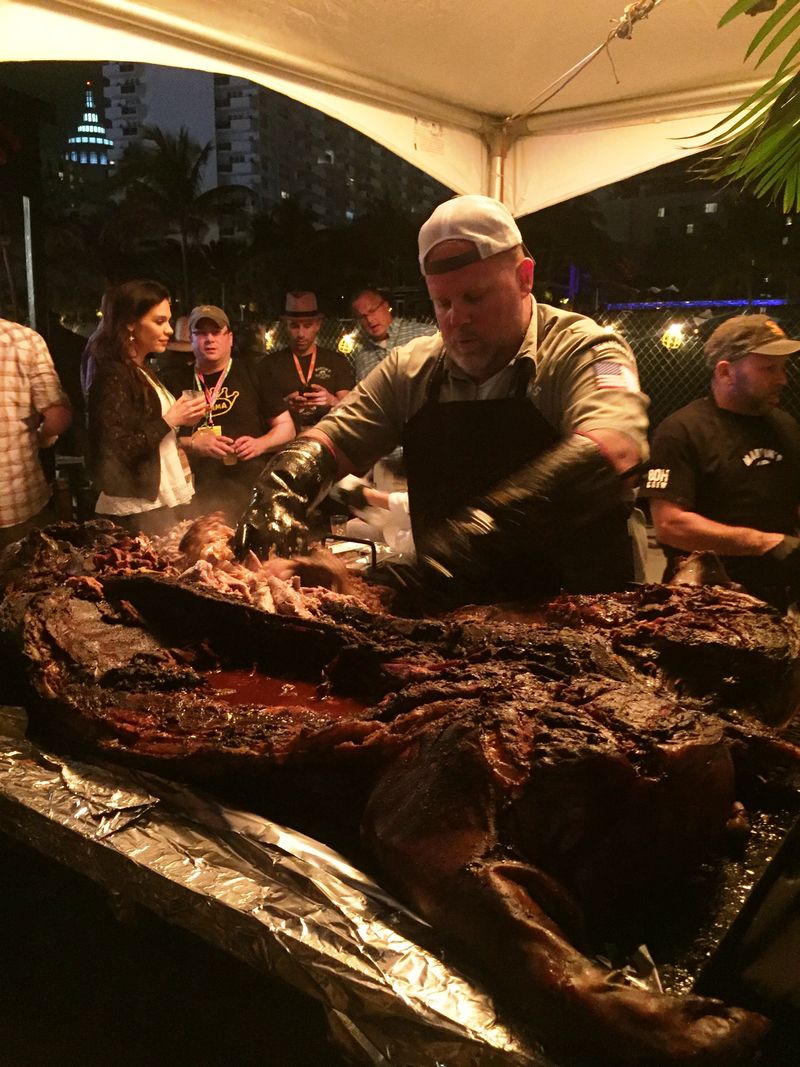 Above, Pat Martin works a whole smoked hog at Meatopia. 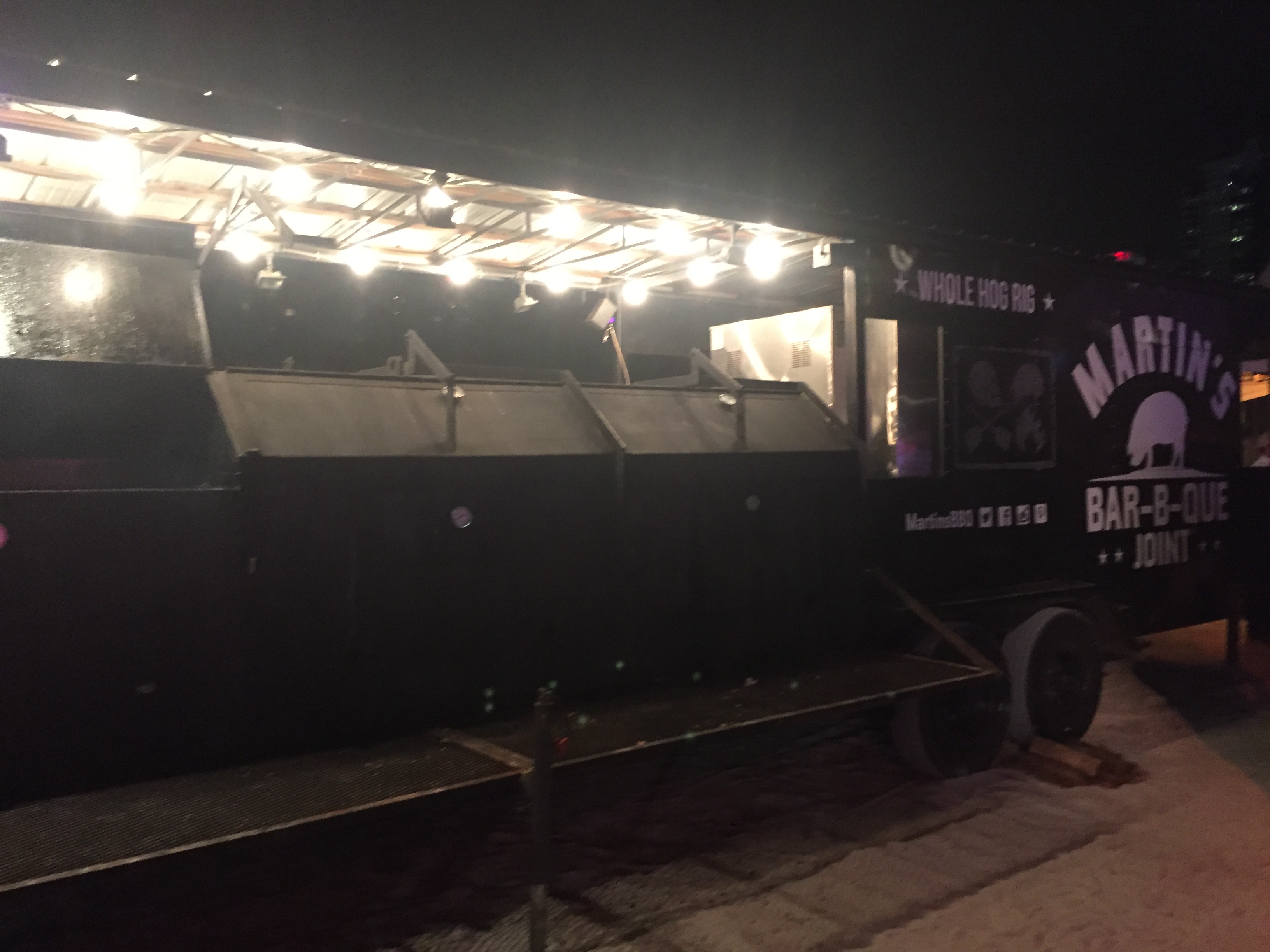 Posted by Miami Herald at 11:33 PM in Food and Drink | Permalink | Comments

Uncorked - The Podcast - with Hedy Goldsmith 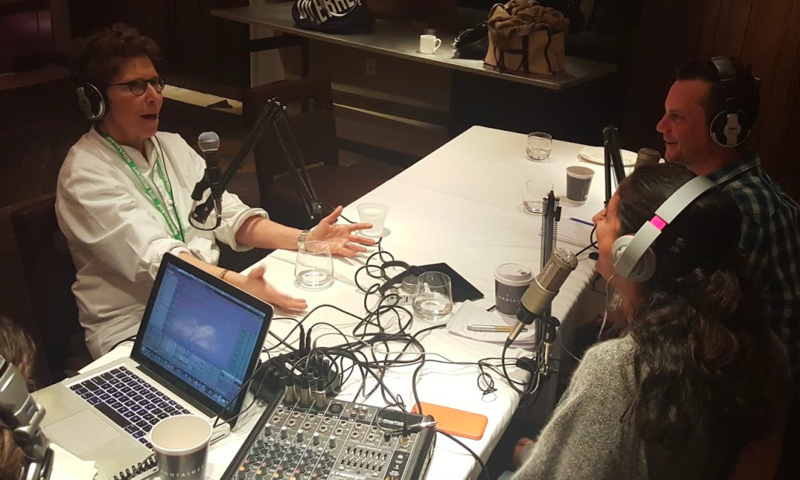 Famed pastry chef Hedy Goldsmith, now based in L.A., returns to Miami Beach for a visit with food writer Sara Liss and Miami.com dining editor Evan Benn at the Fontainebleau Miami Beach during the South Beach Wine and Food Festival. Among the many topics of conversation: making brownies with marijuana and the transition from the East Coast to the West Coast.

Posted by Miami Herald at 9:13 PM in Food and Drink | Permalink | Comments

What worked: The outdoor patio with its exuberant tropical decor provided a theatrical backdrop, while the wafts of smoke emanating from the open kitchen made us feel like we were in a gaucho's back yard.

What didn't work: Navigating that organ meats platter - was that kidney or sweetbreads I just tasted?

Best thing we ate: The medium-rare tomahawk steak with a flavorful charred crust.

Craziest thing we saw: The hotel's famous Damien Hirst sculpture of a nine-foot gilded skeleton of a wooly mammoth.

Posted by Miami Herald at 5:02 PM in Food and Drink | Permalink | Comments

Gabe Orta of Bar Lab and chef Timon Balloo of Sugarcane Raw Bar Grill cooked and mixed cocktails that paid homage to some of Miami's many cultures. It was part of Saturday's seminar series at the South Beach Wine & Food Festival.

What worked: The hosts truly made guests feel at home, encouraging sharing from table to table and bringing out seconds. They transformed the seminar setting to an intimate table among friends.

What didn't work: While the arepa with chorizo and pineapple relish was delicious, I wish it had been hot.

Quote of the night: "Is it OK to bathe in it?" A guest asked about the Sofrito Margarita.

Posted by Miami Herald at 2:59 PM in Food and Drink | Permalink | Comments