« Should you bring a partner to your company holiday party? | Main | Overwhelmed by the holidays? How to make time choices. »

Urban Meyer resignation: citing family as an explanation? Get real! 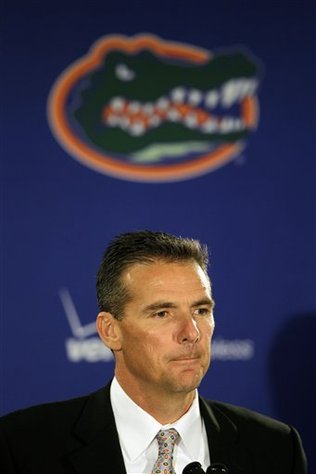 As a Gators alum, I'm sad that Urban Meyer has resigned as University of Florida football coach. But more than being sad, I'm mad at him for his explanation.

Meyer,46, squirmed his way out of the job with time left on his contract by using the "family" excuse, that fallback explanation men use when they want their resignation to appear more palatable. "At the end of the day I'm convinced you'll be judged on how you are as a husband and father and not on how many bowls you win," Meyer said at a Gainesville news conference, explaining that he had not seen his volley-ball-playing daughters play in high school. The truth is Meyer was just plain exhausted and burned out. He has grown tired of 18-hour work days, recruiting road trips and the relentless pressure to be No. 1. It had led to health problems for the coach. And worse, his team was performing poorly this year.

Now, don't get me wrong. I don't blame Meyer or any top executive for stepping down when they are burned out. And, I'm sure Meyer does want to spend time with his kids. But that rarely is a top motivator for a man at the prime of his career.

I remember in 2005 when Stan Van Gundy resigned as coach for the Miami Heat. His explanation was the same: he wanted to spend more time with his family. He said that because of travel, games and practices, he would have seen his children at home only 49 days out of 170 during the basketball season. "That's just not enough any more for me," he said at a press conference. (It just so happened, the team had come off of a horrible playoff loss) Shortly after, he took a job with the Orlando Magic.

What happens when a women cites "family reasons" for leaving a top job? Just ask Brenda Barnes. When she stepped down as head of PepsiCo’s Pepsi Cola North American unit in 1997 to spend more time with her children, people accused her of setting the women's movement way back. Double standard? You bet.

Frankly, I tired of men hiding behind the "family" excuse for leaving a job under pressure. If men really want to spend more time with their family, they will advocate for change. They will make workplaces more family friendly so the workload is spread and people at the top can balance their job and see their kids every once in a while. The goal is not to make it either/or. The goal is to make it both.

As Herald columnist Linda Robertson writes today: "Meyer will soon be tempted to win more titles. Can he balance family and football? Or does it have to be family or football?"

I'd bet the farm we'll see Meyer back at work soon, just like we did Van Gundy. I'd like to think in his next job, he'll advocate for balance.