« Do Busy Schedule Mean Lax Parenting? | Main | Virtual assistants are win-win for all » 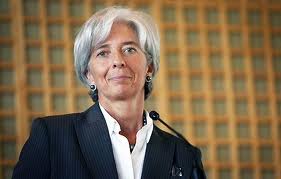 Years ago, I had the privilege of interviewing Christine Lagarde. At the time, she was global chairman of Baker & McKenzie, one of the world's largest law firm with more than 3,400 attorneys. That in itself was impressive. As most law firms are, Baker & McKenzie was dominated by male lawyers and had a presence in 35 countries. Christine was the first woman to hold the position. Making this feat even more remarkable was the the firm was based in Chicago and Christine had risen through the ranks in the Paris office.

When I had lunch with Christine I was impressed with her. She's poised, multi-lingual, brilliant, politically savvy and easy to talk to about any topic. I was even more impressed when I learned that she was a mom.

I set out to write a profile of Christine and her success. In the process, I made an interesting discovery. All was not well on the home front. Christine was traveling constantly between Chicago and Paris. One of her son's was having trouble in school, her marriage was rocky and she was apart from her children more than she was with them. Her husband at the time had take over most of the child rearing duties, although he wasn't the father of the boys (Christine was a widow when she married him). I could tell Christine truly loved her sons. But she knew she had to make sacrifices to achieve career success at the level she had climbed.

She made this comment to The Guardian:  When they were small, she says, the juggling of an alpha career and children was a struggle. "The balancing act is very hard. I had to accept that I could not be successful at everything. You draw up priorities, and you accept a lot of guilt." She is thoughtful. "It's part of growing up – as a woman, a spouse, a mother." She remembers an upsetting incident when a headmistress chastised her for working too much. "You can not let guilt engineer your life," she adds. "But you know, in my career, the best support in the end was my kids."

I knew Christine was smart and ambitious and I wasn't surprised recently when I saw Christine in the headlines again. She just was named the new International Monetary Fund (IMF) Managing Director, replacing the Dominique Strauss Kahn.  That makes 55-year-old Christine one of the most powerful women in the world.

Since I lunched with Christine, she was headhunted to become Trade Minister in the French government. After a one month stint as Agriculture Minister in May 2007, she became Finance Minister and was a few months short of being the longest-serving finance minister of the Fifth Republic before she was tapped for this new high profile position.

Christine's two sons now are 22 and 24. She is divorced and has a new boyfriend. She recently told The Independent that her delight, away from work (when she can get away from it) is to spend time with them.

If were to ask Christine about sacrifices, I know she would read off a list. I am sure her sons have a list, too. But with success comes trade-offs, especially for mothers. I just wonder if Christine has found a way to overcome guilt and whether she would say the sacrifices were worth it.

Readers, do you think women as powerful as Christine make more sacrifices to achieve positions of influence than men do? Do you think the super high level of success as a working mother means not feeling guilty about making those tough choices?