« Three things you must do immediately for better work life balance | Main | Labor Day: Why Black Men Aren't Getting Jobs »

Do morning people have a professional edge? 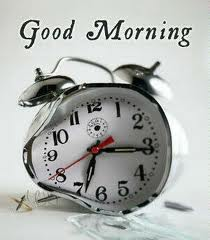 My husband wakes up perky at the crack of down, bounds into the shower without complaining and is at his office desk by the time most people are rising for the day. He's one of the most productive executives that exist and he's home by a decent hour to have dinner with the family.

So, when I read Laura Vanderkam's article asking "Do morning people have a professional advantage over others?" It made me really think about work habits and our internal clocks. I've concluded that in most lines of business, morning people do have an avantage. It pains me to admit it.

Vanderkam is an expert of sorts on how people use their time. She published a book called168 Hours: You Have More Time Than You Think. In article, she points to research published last year by Harvard Business Review, biologist Christoph Randler. He found that people who were most energetic in the mornings were more likely to identify long-range goals for themselves and feel in charge of making things happen.

While night owls may be more creative, "they're out of sync with the typical corporate schedule," Randler told HBR. "When it comes to business success, morning people hold the important cards."

Ouch! That hurts...I'm one of those night owls. I get tons accomplished between 10 p.m. and midnight. I admit, I might not be conquering those tasks with the same energized vigor that I would at the beginning of the day.

As a longtime business reporter whose interviewed dozens of successful CEOs, I must confess that almost all of them - male or female -  have told me they wake up super early and get tons of work done before anyone else gets to the office.

Accomplishing things in the morning sets off a "cascade of success," Shawn Achor, author of The Happiness Advantage told Vanderkam. Even more, by putting important-but-not-urgent activities like exercise, religious practices, or strategic thinking early in the day, you can knock these tasks off your list before your will power is exhausted by boring meetings or the siren song of the office vending machine.

Another reason morning persons have an edge: fewer distractions. Working when others are asleep allows you to focus without interruptions and make critical decisions before others even walk in the door." Even if your colleagues are all early risers, they likely want to use this time to focus, too -- and may feel sheepish putting a conference call on someone's calendar at 6:30 a.m.," said Randeep Rekhi of WineDelight.com.

One of the biggest advantages may be at home: If you start work earlier, you may get done earlier, giving you a chance to spend the early evenings with your kids before they go to bed.

So the question that follows is "Can you become a morning person?"

I know people who have tried. It can be sustained for a short period of time...but it's so hard to make it stick when you're wishing you were back in bed.

Readers, do you agree that morning people have a professional advantage? If you're a night owl, do you see any career advantage in your work schedule?