It's okay to ask for a sale

A friend of mine manages to get businesses to donate all kinds of raffle items to raise money for non-profits. I'm amazed and awed each time I see her in action. Her secret is pretty simple: she asks.

I hate asking people for things. I'm a lousy sales person, mostly because I hate rejection. That seems to be a problem most people face, but in business it can take you down. Spending hours networking and not turning that time into revenue can also wreak havoc on your work life balance.

On Friday, I learned a lot about asking for business and closing deals at the Women's Success Summit in Miami. Michelle Villalobos, a personal branding consultant and founder of the Summit, told me she picked the topic because she hears often about how challenging it is for women business owners to close a deal. "Women are excellent at networking and every piece of the sales process up until the time to close the deal." Michelle says we just have to get bolder about asking for business. We need to give ourselves permission to be fearless and more aggressive. "Everything else is a waste of time if we can't turn a relationship into revenue," she says.

At the Summit, sales guru Ivan Misner, founder of BNI, spoke about how women spend time building relationships with our dry cleaner, other women business owners or soccer parents and then we don't ask them to buy what we're selling. Examine who you have relationships with and whether they would want what you offer.

Listening to the statistics, I think closing the deal is hard for many men, too.

Here are some tips I picked up at the Summit:

* Target the customer who typically finds value in your product or services. Melissa Rubin sells high end condos for Platinum Properties. She networks in places where her best prospects circulate such as bar association meetings. By approaching the right customer, it takes away some of the fear of rejection, she says.

* Tap into an emotion. What are you selling that will help ease someone's pain? Jody Johnson, founder of Action Coaching, says people are more pain averse than pleasure seeking. Maybe you're selling something that will help a struggling business bleed less cash or maybe you're product that will help someone improve his or her marriage that's falling apart. Speak to their concerns when you ask for their business.

* Listen, watch, then ask questions. What a potential customer says or where he looks gives you signals for how to create a win-win. Jolie Glassman, owner of South Florida Boxing, says she formulates how she asks for the sale based on what someone says they want to accomplish and where they look when they enter the gym. "I get in their world and then I get them in mine," she says. At the end of her gym tour, she never asks the client directly if they want to sign up, rather she gives them two options that both assume they are going to register.

* Remove any impediments. Alex Lessa, speaker author and serial entrepreneur, says he used to sell martial arts memberships. When it would come time for the close, potential customers would say they didn't have their wallet buy a membership. So, Lessa began asking for a potential client's drivers license when he would enter and held it while they would do their trial workout. If you have your drivers license, you usually have your wallet!

* Sell your value. To avoid bickering over price, present your value and how the customer is going to benefit from doing business with you. "You can't establish price until you talk value," says Sebastian Rusk, founder of Social Buss TV and a Miami social media consultant,

* End with a question.Some people like to ask, "What do we need to do to get started? or "Would you like to pay all at once or in payments?" The key is not to close with a yes or no option but rather an option that has the client focus on when or how they are going to to follow through with your request.  Rusk says he will close by asking, "When would you like to get started?"

* Know when to walk away. If you just can't seem to close the deal, walk away. Natalie Boden, owner of BodenPR, a Miami public relations agency, says that's key in business. Usually, she presents her value in a way that the response is "When are you available?" But if the response isn't there and doesn't seem to be coming, she moves on.

Below are some photos from the Women's Success Summit at the Miracle Theater in Coral Gables. If you missed it, don't fret. Michelle holds them every six month and chooses a different hot topic each time. 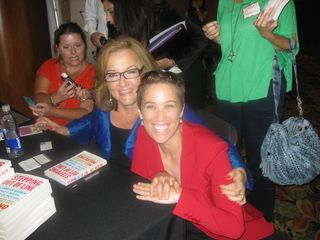 Nell Merlino, founder of Make Mine A Million, and Jessica Kizorek, founder of BadassBusinessWomen.org 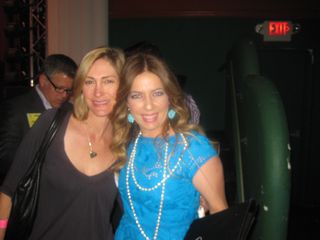 Me and Michelle Villalobos, Summit Founder and Emcee 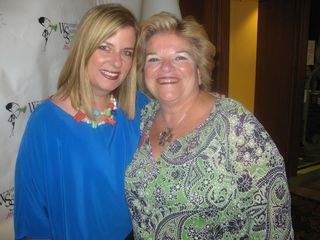 Lourdes "Luly" Balepogi, president of Chispa Marketing and her mom, an educational consultant.