Talking to girls about equal pay

As my daughter heads into her junior year of high school, she's starting to think about what career might interest her. I ask her questions, listen to her answers and try to give her hope that whatever profession she chooses, she will be happy. But will she be paid fairly?

It sickens me to think that one day my daughter may land the same job as one of her brothers, and get paid less to do it. How do you explain that to a young woman?

Today, an article caught my eye that reminded me that the next generation of women will inherit the need to fight for equal pay. What do they need to know to take on that battle?

They need to know who Lilly Ledbetter is and what she accomplished and why her name is associated with equal pay. 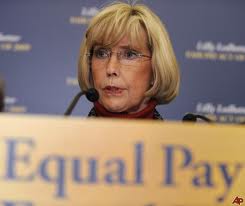 Lilly Ledbetter became a rare female manager in a man's industry in the 1980s, as a supervisor at the Goodyear Tire and Rubber plant in Alabama. She sued the company for paying her less than her male counterparts and took her lawsuit all the way to the U.S. Supreme Court. She lost because the court ruled that she should have filed suit within 180 days of her first unequal paycheck--despite the fact that she said she had no way of knowing that she was being paid unfairly all those years.

Her name has become well known because of the Lilly Ledbetter Fair Pay Act of 2009, which loosened the time frame in which people could file pay discrimination charges.

Today, I read a Workforce.com interview with Lilly Ledbetter, who now is 74 years old. I wanted to share some of the highlights:

Workforce: How have things changed in the workplace from the '80s and '90s to today regarding pay equality?

Things are changing. One of the things that makes me the happiest is to get invited to go speak to a group of new hires or a corporation about integrating women into their operations, and to encourage young high school and young college women and minorities to go into engineering, the sciences, mathematics—get those degrees. Companies are learning that the makeup of the workforce is so much stronger when they have both men and women.

The young men get it. I go to a lot of college campuses to talk. I'm almost as popular with the young men, because they talk about their mothers and their sisters—how they've been held back. I've heard so many examples. They understand when they get out of college, if they get married, they need a wife working, and they need her to be paid fairly too.

Workforce: What should employers know about equal pay?

Ledbetter: It's very simple. If you treat people fairly and equitably, you've got nothing to worry about. And it's also a win-win situation, because when employers make it pretty well-known that everybody's being treated equitably and fairly for their work, they have a better team. They have people who are more enthused about coming to work. They don't stay out of work. They can't wait to get there. If it's a service business, when you walk in it's hard to tell who the owner or the manager is because of the other team people working so hard. And if it's a manufacturing environment, they put out a better product—more productive, less scrap. And they don't stay out of work. The absentee and the safety records are almost perfect. It's just a 'win' situation for the families of this nation as well as the corporations and employers.

Over the next few months, we're going to hear political candidates debate on various topics. We will hear talk about women's issues, family issues and unemployment. We will hear candidates try to garner support with stories about how they were raised by single mothers and understand the plight of working mothers. I'd love to hear one of the explain to young women -- our nation's future mothers -- why they will graduate college, work hard, and still get paid less than a man.

My daughter recently asked me if women business owners and female executives pay their female employees the same as they do their male workers. I told her the truth: I don't know the answer. I'd like to confidently answer yes. But I can't.

Should I tell my daughter women are making progress in gaining equal pay? Just this June, the Senate failed get enough votes to advance the Paycheck Fairness Act, which would have required employers to demonstrate that any salary differences between men and women doing the same work are not gender-related. It also would have prohibited an employer from  retaliating against employees who share salary information with their co-workers.

To be sure, equal pay is gaining traction as a hot button issue. Clearly, Lilly knows we're not there yet and unfortunately my daughter now knows that too. But I told her what I hope other parents are telling their teenage daughters -- pursue on.