How to take control of email 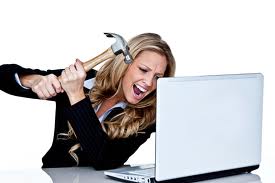 Today, I came back from a holiday weekend to find myself facing email overload. It kind of made me feel overwhelmed before I even began my day. Can you relate?  It seems regardless of how hard I try to keep up, I just can't get email under control and taking off a few days made it worse. So, I'm the first one to welcome any advice on this topic.

My guest blogger Dmitri Leonov, vp of growth for Sanebox, has some thoughts on gaining better control of your Inbox. Sanebox is email management software that filters messages, organizes them, and initiates reminders.

Do you remember when you first got email? If you’re 35 or older, you might have imagined yourself as Tom Hanks or Meg Ryan in “You’ve Got Mail,” about to get a message from your sexy soulmate thousands of miles away. If you're a Millennial, it was probably one of the first exciting “grown-up” things you got to do—and far less disturbing than those AOL chatrooms filled with creepy guys named Bob.

Sadly, the days of pure email joy have come to an end. Email has changed a lot in the last decade. Today, email often feels less like an exciting new friend and more like a bipolar stalker who screams at you all day. And if you’ve ever had a stalker, you know that they make it IMPOSSIBLE to get anything done.

The average person spends 28% of work time reading and responding to email.

“Emailing skills” probably wasn’t in your job listing, but emailing is likely the thing you do most at work. The McKinsey Global Institute found that the average employee spends 13 hours a week reading and responding to email—28% of a typical 40-hour workweek.

That means that the average employee is spending 650 hours a year reacting to largely non-urgent and irrelevant messages, distracted from the kind of work that actually moves a company forward. For employers, not having a smart email system is akin to burning money, which is totally illegal, by the way.

Less than half of emails deserve your attention.

You may feel like you need all of your emails right away, but that’s simply not the case. According to billions of internal SaneBox data points, only 42% of emails in the average inbox are important or relevant. The majority of your email can be processed in bulk at a later date or time. Imagine a world where your inbox is less than half as full. It’s pretty beautiful.

It takes 64 seconds to recover from an email.

Imagine that you receive 10 emails an hour during the average workday. About six of those emails don’t need your attention, which means that if you check every one, you’re spending an additional 10% of your time (roughly) recovering and getting back to work.

If you feel like the last time you felt happy was during the Clinton administration, it doesn’t just mean that you’re probably a Democrat. It could also mean that your email habit is making life more stressful. A team of researchers at UC Irvine and the U.S. Army found that participants in a suburban office environment switched computer windows 18 times per hour if they did not have email access, versus 37 times per hour if they did. Those switching windows 37 times an hour were constantly in a “high alert” state, which resulted in a constant, “high-stress” heart rate. Considering the psychological and physiological damage that stress wages, getting your email under control may be the smartest health move you’ve made in a long time.

A 2012 study by the Grossman Group found that banning internal email or forbidding employees from using email outside of work hours simply doesn’t work. It stifles internal communication, and employees overwhelmingly hate such a policy. But that doesn’t mean employees are happy with the status quo. They want their email, but they also want the experience of using their email to be less insane. And that’s where SaneBox comes in. (See what I did there?)

Thanks Dmitri! And here's a review of Sanebox by PC Magazine.