« Companies where women have clout | Main | Too busy for love? Romance boosters to last long after Valentine's Day »

When celebrating Valentine's Day at work gets awkward 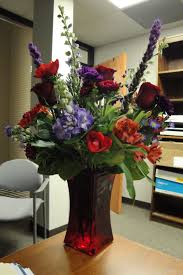 A few years ago, I interviewed the owner of a flower shop. He told me how disappointed he was that year because Valentine's Day was on a Sunday. He explained that people send more flowers when Valentine's Day falls during the week because they can send them to workplaces where the receiver gets oohs and ahhs from co-workers. Makes sense to me!

This year, with Valentine's on Friday, I bet the delivery guys will be busy.

I wonder, though, if receiving flowers at work can get awkward for singles. When the flowers arrive, all of a sudden, you have co-workers up in your business, wondering who the flowers are from. Or when they don't arrive, you feel left out. Or if you have an office crush, you're left wondering whether to confess it.

I just read a newspaper article about singles who are sending themselves flowers at work.

It's an option being offered by a website: myfakevalentine.com.

In the article, the founder says the idea was inspired by her own life:"I have a lot of single friends who dread Valentine's Day every year when everyone at the office is getting flowers," says founder and CEO, Shavanna Miller.

So she came up with a way you can take matters into your own hands. First, choose your type: The Romantic, The Secret Admirer, or The Creep. And the company will even write you a personalized note!  The article said some people thought the idea was a little bit pathetic and asserted that they would never consider doing such a thing.

However, florists say that every year, they have customers send themselves flowers. So why not just embrace it? "Nothing to be ashamed of," says Nosegay Flower Shop designer Alisa Rabinovich. "Flowers make people smile no matter who they're going to or who they're coming from."

I know Valentine's Day is weird for singles, but I wonder if there's anything workplaces can do to make it less awkward. Even as the flowers arrive, maybe bosses should make the day an opportunity for all workers to feel celebrated -- bring in doughnuts or lunch for the staff or give all workers a rose or chair massage.

Do you think Valentine's Day gets awkward in your workplace? Any good ideas for making it less awkward?