Would a pay raise improve your work life balance? 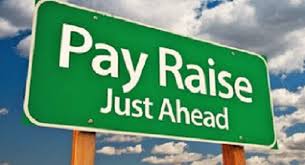 What would you do with a raise?

Would you make changes that would make your home and work life easier? Would you buy a more reliable car to drive to work?  Or how about hiring someone to care for your elderly parent while you're not home?

My son gets minimum wage as a bus boy at a local pizza restaurant. He works like a dog for each cent he brings home. Still, he doesn't think a small increase would make a big difference for the dishwasher who works a second job to support his family. I disagree and have told him that every penny counts when you are living paycheck to paycheck.

Across the country, fast food workers have been rallying for higher wages, trying to get food businesses to pay at least $15 an hour. Now that's a significant increase from the $7.93 a cook at a Miami fast food joint says he makes. The cook says that extra $7 an hour would  allow him to pay rent and have enough left to buy an ample supply of food for his family.

White collar workers are struggling, too. In some workplaces, staffers haven't seen a pay jump in at least five years -- even if they are busting their butts.

The good news is U.S. employers are planning to give pay raises averaging 3 percent  in 2015, on par with the 2.9 percent average raise in 2014 and 2013, according to a survey of nearly 1,100 U.S. companies by compensation consultant Towers Watson.

A small raise is better than no raise, right? But what if you feel like you're working harder than your colleagues?

Who gets a raise and why can create major contention. Employees believe that employers are falling short in how pay decisions are made, and that there is much need for improvement,'' says  Towers Watson managing director Laury Sejen. Only half believe they are paid fairly. Their big gripe is that employers are not differentiating pay for top performers as much as they have been in recent years.

The median annual salary among the nation's 106.6 million workers is now about $40,560, according to the Bureau of Labor Statistics.

"Base pay is the No. 1 reason why employees join a company or choose to leave,'' Sejen told USA Today.  "So there's value in companies making the effort to improve base pay."

Would a pay raise make a difference in your work life balance? How significant a raise would you need to see a real different in your lifestyle?