How to be less forgetful 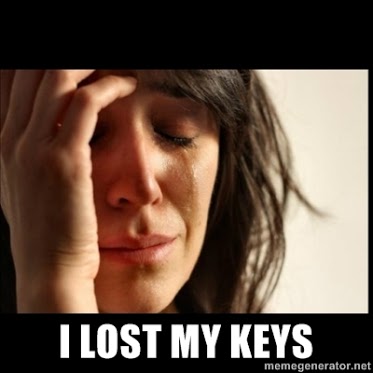 You regularly rack your brain to remember a book a friend recommended. You were on you way home from work and you can't remember the errand you were supposed run.  You suddenly can’t recall the name of your kid’s teacher. Sound familiar?

It does to me.

I feel like I have too much on my brain in my struggle for work life balance. Increasingly, I find I have to write even simple things to remember down them. And still....

Fear not: most forgetfulness isn’t anything serious, says Majid Fotuhi, MD, PhD, founder and chief medical officer of NeurExpand Brain Center in Luterville, MD and co-author of The Memory Cure.

Here are surprising things that impact your memory in not-so-good ways, according to an article in Time Magazine.

1. Thyroid. “People with high or low thyroid levels—which are very common in women—may have difficulty with memory and concentration,” he says. Ask your doctor for a simple thyroid test to determine if it’s the culprit behind your memory problems.

2. Hot flashes. “The more hot flashes a woman experiences during menopause, the worse her ability to remember names and stories,” says Dr. Fotuhi. “Fortunately, hot flashes don’t damage the brain in any way. Memory improves once the hot flashes subside.”

3. Lack of Sleep. “Individuals with sleep deprivation a. Don’t stop taking your (potentially life-saving) medications, but talk to your doc if you believe any drug you’re on may be messing with your memory.nd sleep disorders not only suffer from impaired memory but also daytime fatigue, impaired attention, and reduced reaction time.” The standard recommendation of eight hours of sleep a night doesn’t necessarily work for everyone.

4. Stress. Do you worry  -- a lot? Worrying can affect your memory, several studies show. Prolonged periods of everyday stress increase cortisol levels in the brain, which causes our brain cells to lose synapses (the bridges that connect our brain cells to one another), and make it more difficult to create and retrieve memories. Researchers found that repeated stress reduced receptors in the part of the brain that’s connected to thought processes.  Finding ways to relieve stress may help.

5. Pharmaceuticals. Check your medicine cabinet: many common prescription drugs can make you feel forgetful. Don’t stop taking your (potentially life-saving) medications, but talk to your doctor if you believe any drug you’re on may be messing with your memory.

Here are things that can help with memory:

1. Green Tea. How much green tea has not yet been determined, Dr. Fotuhi says in Time Magazine. He recommends combining green tea with other healthy habits such as exercise for greatest memory improvement benefits.

3. Vitamin B12.  In addition to fatigue, loss of appetite, constipation, and weight loss, a B12 deficiency can also lead to memory problems. Your doctor can give you a blood test that determines whether you should be taking a vitamin B12 supplement.

4. Keep lists. Getting things off your brain and on to paper makes a huge difference in what I'm able to remember. Paula Rizzo is a master in helping people create lists that help them remember things. Her new book,  “Listful Thinking: Using Lists to be More Productive, Highly Successful and Less Stressed” is will be coming out in January and it's on my to do list to buy it.

5. Visualization. Need to memorize a list of terms or names? You'll have a better chance of being able to recall them if the words are associated with an image, according to The Huffington Post. For example, if you have to remember a meeting at 4:30 p.m., try remembering your favorite quartet (The Beatles?) and a 30th birthday cake. It may sound silly, but you'll be grateful when you're right on time.

6. Label. Franklin Roosevelt was known to have a memory that would put most of us to shame -- he could remember the name of someone he met just once, months ago, seemingly without difficulty. His secret? Roosevelt was able to remember the names of everyone on his staff (and everyone he met) by visualizing their names written across their foreheads after being introduced to them. This technique is even more effective when the name is imagined being written in your favorite color marker, CNN claims.

7. Pay attention. Perhaps the best (and arguably most difficult) memory boost of all is simply paying attention to the task, conversation or experience at hand. Distraction makes our memories weaker, and consequently we are more prone to forget things.

I'm confessing that over the weekend, I said "nice to meet you" to the mother of my son's friend. She sounded annoyed and told me we've met before. Being forgetful is so embarrassing!

Do you think we're getting more forgetful as a society? Do you think it has something to do with all the information coming at us? What's something you've forgotten recently and do you have any tricks for ensuring you don't forget the small stuff?