Bouncing Back from Failure 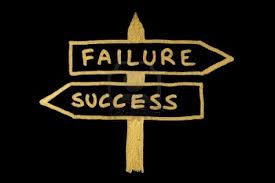 Did you make an expensive mistake in 2014? Did you experience a setback in business or in a personal relationship? At some point, we all face rejection or failure and that's okay because at least we tried.

Now is a great time to bounce back while you still have most of 2015 ahead of you. I've reached out to people who have been there to get you some great advice for how to turn things around with your business, career or home life.

* The first step is acknowledging your situation. This is not an easy step. It's really easy to wear blinders and believe everything is okay.

* The next step requires searching for the root cause of what went wrong. “It’s usually not what people think it is,” said David Harkleroad of Chief Outsiders, a consultant to CEOs of small and mid-sized businesses.  Usually, listening carefully to customers, team members and trusted advisors reveals a clue for how to course correct: “It requires listening to understand, not listening to respond.”

* Now it's time to evaluate your options. You will need to figure out whether to simply pivot or completely shut down operations. “You have to be decisive but you also have to live with your decisions,” says Vincent Smith, a Miami pharmacist and serial entrepreneur whose latest product is PopScope.  “I learned you don’t want to go on too long if you’re not making money and you don’t want to be too connected to an idea where you no longer become objective. Whether you’re the guy who introduced McPizza to the McDonald’s menu or the one who expanded Pollo Tropical into an underperforming market, recognizing the signs for when to give up and reading the signs can be critical to long-term success.
* Take a team approach to reversing failure. Success often requires a team who can cover each other’s blind spots. “To get that means you sometimes have to give up control,” says Johnson of ActionCoach. “If you get the right people in the positions they are wired for and empower them, that will reverse failure because it is leverage as opposed to you trying to micromanage everything yourself.”
* Hone your network. If your business or strategy fails, your business relationships will become crucial. Your network should include  mentors, future employers or team leaders who will give you a job, point you down the right path or give you the support to build back your confidence.

Kenneth Rader and his twin brother Josh Rader founded The Cereal Bowl in 2006. The fledgling novelty concept selling dozens of cereals for about $4 a bowl was unable to survive the 2009 recession when credit tightened and disposable income became scarce. But when the business shuttered, the Raders bounced back by using existing connections and applying learned skills in a new way. “Walking away was hard to do, but we made good relationships and gained mentors,” Kenneth says.

* Learn from your mistakes. Kenneth says running a business, particularly one that failed has given him invaluable business knowledge. “Mitigating risk is an important skill that we learned and use even in our current jobs.” Adds Josh: “You get that ability with failure to look back and see what we should have done, learn from it and move forward.”