How Adam LaRoche got the work family conversation started again 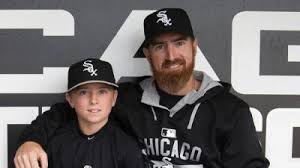 Years ago I worked in a newsroom bureau next door to a charter school. Every afternoon, my co-worker would pick up his young son from school and bring him to the office to do his homework. While I thought it was awesome, I also kind of resented it because I thought that a mother who brought her child to the office every afternoon would get disciplined.

The topic of bringing your child to work became top of mind again last week when Adam LaRoche, a power-hitting first baseman, informed the White Sox that he intended to retire with a year and $13 million left on his contract. He made the decision after being told by club President Kenny Williams that his 14-year-old son, Drake, should appear less frequently in the clubhouse.

Initially, the White Sox welcomed LaRoche's son Drake and even outfitted him with a uniform and gave him a locker inside the clubhouse. Drake began traveling with his father during baseball season, receiving home-schooled lessons.

But Williams had enough of Drake’s constant presence and defended his position to ask his player to leave his son at home by saying, "Where in this country can you bring your child to work every day?"

The answer, of course, is hardly anywhere. And that got me thinking.

Some parents like LaRoche may want to bring their child to work. Some may need to bring their child to work. Indeed, as the Washington Post notes, “most people who wrestle with children-at-work issues do it for straight-up survival, not to form an unusually close bond with a child.” And, while it was LaRoche's choice to quit because he couldn't bring his son to work with him, some people (particularly mothers) have been fired for doing it.

Fortunately, for workers who prove themselves valuable, businesses are starting to bend a little to keep their top talent happy.   Now, it’s up to each of us to ask for what we need to keep our work and home lives on track, convince our employers to give us those accommodations, and be prepared to make decisions based on the response to our requests. In Adam’s case, he faced a tough choice between work and family, and chose family. His decision resonated with baseball players around the country who rallied behind him when he quit, citing #FamilyFirst as the reason.

Tadd Schwartz, a father of two young children and owner of Schwartz Media Strategies, says thinks LaRoche should be able to bring Drake to work with him. Schwartz just allowed an employee to bring a sick dog with him to work. “Culture is critical and if an employee is productive and wants his or her son/ daughter (or dog) in the office and it's not a distraction then I'm fine with it. It’s called flexibility.”

I asked another employer what he thought about LaRoche's action and he told me doesn't think that anyone, male or female, should bring their child to work: "We're paying people to focus on their job, not their child. On an emergency basis, that would be different. But on a day to day basis it's a distraction for the parent and a liability for the company."

I appreciate LaRoche's position as a father who travels a lot for work and wants to spend time with his son. I also appreciate the fact that LaRoche has America discussing this important topic. The movement to make workplaces more kid-friendly has been slow to take hold. But, as more men take on their fair share of childcare duty, I foresee fathers making the tough decision LaRoche made and more employers suffering the consequences for refusing to be open-minded.