« How I overcame fear and improved my work life balance | Main | Exhausted by boarding time? Here's how to prepare for take off »

Women are capable of achieving amazing feats, and for centuries we've done it without recognition. But now, we're achieving way too much to do it without equal pay.

In the last few months, female voices are getting louder, the discontent over the gender wage gap is getting stronger and we're rallying the way we did decades ago when we wanted the opportunity to vote in America. Today, I woke up to learn that five players from the World Cup-winning U.S. national team have accused the U.S. Soccer Federation of wage discrimination in an action filed with the Equal Employment Opportunity Commission.

Women soccer players want equal pay and they should get it. It's an awesome goal. 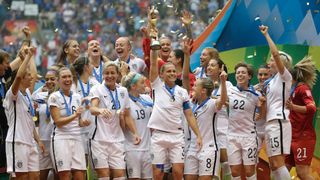 The soccer players' lawsuit comes only weeks afters the subject of equal pay in tennis grabbed headlines. It started with awful comments by BNP Paribas Opentournament CEO Raymond Moore said female players in the Women’s Tennis Association “ride on the coattails of the men.” He followed up by suggesting that women should “go down every night on [their] knees and thank God that Roger Federer and Rafa Nadal were born, because they have carried this sport. They really have.” Moore has since issued an official apology for his “erroneous” comments that were in “poor taste.” But Novak Djokovic, the world’s top men’s player, who won on the men’s finals this weekend, added more fuel to the fire, saying that men should “fight for more” money because their matches have more spectators that those played by women.

Serena Williams, wasn't going to take that and fired back, saying “I think Venus, myself, a number of players—if I could tell you every day how many people say they don’t watch tennis unless they’re watching myself or my sister—I couldn’t even bring up that number,” she added.

Serena got her point across. Moore took so much heat for his comments about women's pay that he announced he was stepping down as CEO of the tournament.

Outside of the sports world, the call for fair pay has cropped up in other professions. In my Miami Herald column yesterday, I wrote about young female lawyers in Florida surveyed by the Florida Bar who complained of inequities in compensation in the legal industry. Their collective voices are bringing attention to the issue in the legal community.

And then there is the attention Jennifer Lawrence has brought to equal pay in Hollywood for actresses. In a widely read essay Jennifer addressed wage gap in Hollywood, which was made explicitly clear to her after the Sony hacking scandal revealed she was paid less than her male co-stars in "American Hustle."  She wrote that she wasn't so much upset with Sony as she was with herself, believing she "failed as a negotiator." She attributed this failure to "an element of wanting to be liked that influenced my decision to close the deal without a real fight. I didn't want to seem 'difficult' or 'spoiled.'"

Her piece sparked not only sparked discussion, it launched the Women Entertaining Change movement in

Hollywood in which actresses and female directors are speaking out about fair pay and opportunities for women. The Today Show has been highlighting outspoken women in Hollywood and their demands for an equal playing field.

Women may have gotten the Equal Pay Act in 1963, making it illegal to pay men and women differently for the same type of work, but today, women are still paid, on average, only 78 cents for every dollar a man earns. For women of color, that pay gap is even wider. In 2009, President Obama signed the Lilly Ledbetter Fair Pay Act, intended to restore and improve on equal pay law.

Yet, women still experience pay inequality across the board -- whether you're Hollywood's , a clerk in a retail store or a businesswoman.

My mother's generation went mostly for jobs that were set aside for women. My generation fought to ascend into careers that had been off limits and we're still fighting to get the leadership positions in businesses that we think we deserve. Now come the millennial women and they assume they are going to be business leaders, law firm partners, world renowned athletes and Oscar winning actresses --  and they want to be paid equally for it. They are speaking out about it -- loudly.

I believe they will be heard.

Not because the men want to hear them, but because they no longer can afford not to hear them. These women are their daughters, their wives, their bosses.They are smart, competent, and increasingly well educated and think big. They are saving lives, directing corporate strategy, winning sports events, bringing audiences to the movie theaters, representing litigants, discovering cures and inspiring the next generation of women who will make a difference in the world.

These young women see that they are sacrificing as much as men and working just as much and they want to be appreciated for it. Not with praise or trophies but with equal treatment and compensation.

Their voices are loud. Their strategies are targeted. Their actions are creating dialogue. I believe the time is now and equal pay is in their grasp. 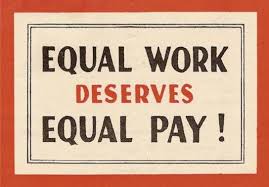