What Working Fathers Can Learn from NBC's This is Us 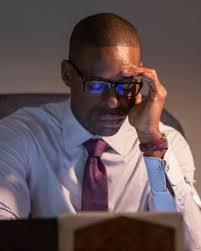 Like many Americans, I love a good television series. My newest addiction has been the NBC drama, This is Us. Last night, the show highlighted a topic I am thrilled to see get screen time on prime time television: Men, Work Life Conflict and Stress.

So, here's what happened: One of the lead characters, a male named Randall, had a breakdown while trying to balance his high powered job and his family life. In the past, plenty of television shows have featured the difficulty women have in “doing it all.” But Randall’s meltdown while trying to perform his job, take care of his children, be there for his siblings and tend to his dying father, was powerfully portrayed, with the episode ending with the character on the floor of his office late at night, crying.

If it isn’t evident by now, tons of research shows men are struggling with balancing work and family as much as women are in 2017. Fathers now are more committed than previous generations to being involved in their children’s daily lives. In many workplaces, fathers don’t feel supported when they need to leave early, come in late or go home at a decent hour. While staying an extra hour to finish something up at the office might be a minor inconvenience for some men, for others the late night could mean a complete disaster for his home life.

Rather than end up like Randall, there are positive steps men can take to balance work and family:

Men often are more reluctant than women to admit when they need help, or have a work life conflict. They worry they will pay a penalty in the workplace. However, sometimes, a simple request for flexibility or time off can be the difference between controlling stress or having it rise off the charts. There are options to letting stress overwhelm you. I am confident, Randall would agree.